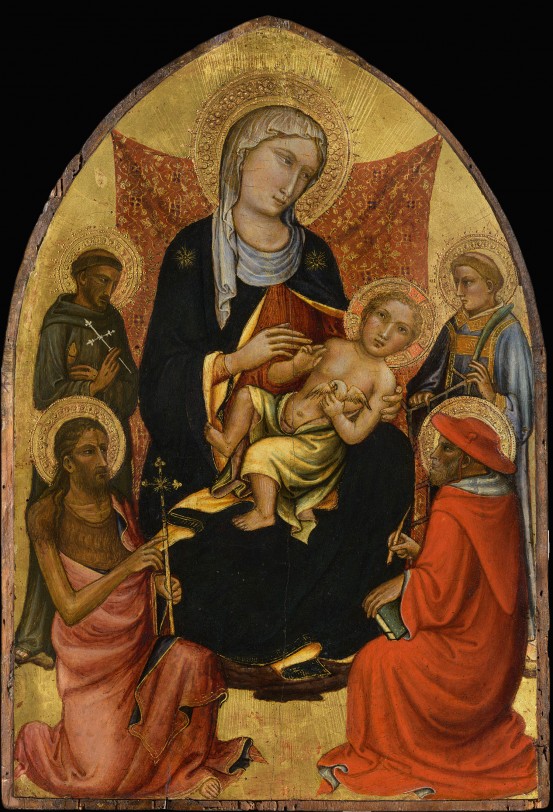 The figure of the Virgin, seated on a layer of clouds, monumentally stands out from a gold damask curtain with floral motifs. She has the Child, who holds a goldfinch, symbolizing the Passion, in His left hand, on Her lap. At her sides, Saints Francis and Lawrence [il santo in inglese è scritto con la ‘w’] – with the palm branch of martyrdom and the griddle, the instrument of his death – and, kneeling below, Saints John the Baptist and Jerome.

The presence of these four saints leads to speculate on the panel’s original destination – or at least on the kind of destination: Saint John the Baptist, as the patron saint of the city, alludes to Florence; Francis might be the saint to which the oratory was dedicated; Lawrence was a favourite saints for popular devotion, known for his cruel sacrifice as a proto-martyr; Jerome, the most represented saint in early XV century painting along with Francis, translated the ancient Holy Scriptures hence becoming the first conveyer of the Christian doctrine. Taking into consideration this iconographic selection, we can therefore suggest that this panel was intended for private devotion, to embellish an intimate space, such as a small oratory, for prayer. One of the Saints, perhaps Lawrence, could be the eponymous saint of the patron, whose identity is impossible to establish, as there is no mention of him in the inscriptions and documents currently at our disposal. The amount of gold in both the background and the thin decorations of garments and furnishings indicate that the panel might have been a private commission of a rich Florentine citizen. The halos, finely punched with geometrical motifs on a veined ground, deserve a comment of their own as they undoubtedly reveal the expertise of an artist who had to have studied Gentile da Fabriano’s masterpieces. Nonetheless, as we will see in detail, the panel cannot be confined to the Late Gothic: its plasticity on the one hand recovers the Giottesque tradition of the previous century and its models while, on the other, connecting with the figurative experiences of the great sculptors of the beginning of the Renaissance: we clearly perceive the influence of Ghiberti’s masterpieces in the way the figures, all considered with the dignity of autonomous monuments, come out of the background; yet, the setting of our panel is fabled, rather than historical, as presented in Ghiberti’s works, due to the absence of shadows.

In an essay written in January 1946 Roberto Longhi assigned the panel to the Florentine artist Mariotto di Nardo and connected it with the triptych of the Madonna with the Child on a throne with Saints Francis, John the Baptist, Euphrosynus and Lawrence in the church of San Leolino in Panzano di Greve in Chianti[i]. Slightly afterwards, in a hand-written note on the image, available today in the photographic database of the Zeri photographic database at the University of Bologna, Federico Zeri confirmed Longhi’s attribution to Mariotto, remarking that the panel had passed through the Vittorio Frascione Gallery in Florence[ii]. The painting was later part of the collection of Stefano Cairola, an important antique dealer and scholar, as well as the director of the Milanese Spiga Gallery. It then became part of the Sienese collection of Aldo Cairola, a central figure in the city’s cultural life from the post-war years to the 1980s, as he was president of the Accademia degli Intronati and a long time director of the Museo Civico[iii].

Although this panel has not yet been published– the personality of Mariotto di Nardo has been discussed in partial studies that have not considered his oeuvre as a whole[iv]. In other words, it was included in wider catalogues of the Florentine painting between the XIV and XV centuries[v] – its presence in the collections of fine connoisseurs, such as Vittorio Frascione, and remarkable art historians, such as Aldo Cairola, attests to the intrinsic historic and formal value of such an artwork. This also brings us to take into consideration Mariotto’s personality and the final results of his long artistic journey: from his early panels, the painter seeks for autonomy from his models, a constant aspect throughout his career. Trained in his uncle Jacopo di Cione’s workshop, in the 1389 Madonna and the Child on a Throne with Four Saints polyptych of the church of Santa Margherita in Tosina di Pelago – commonly considered his first work – he confidently approaches the structures of Agnolo Gaddi and Spinello Aretino, who were at the time considered the Florentine artistic avant-garde of the Late Gothic formal style[vi]. Around 1400, Mariotto’s model is Lorenzo Ghiberti, as is clearly visible in the famous panel with the Annunciation, previously in San Remigio in Florence and today in the Galleria dell’Accademia[vii]. In this period, the artist becomes one of the most important Late Gothic masters in Tuscany and in Italy, sharing the graphic tension of Lorenzo Monaco and Master of the Straus Madonna and, of course, the refined lines of Ghiberti. After 1420 his style changes again: on the one hand the quality of the punches and of the gilding is higher, a clear sign of his understanding of Gentile da Fabriano’s Florentine works. On the other, his figures appear thicker and more monumental: plastically isolated in their spaces, his characters display the solidity of sculptural blocks, hardly contained by the wide garments – especially when we consider the groups with the Virgin and the Child. In this phase Masolino, the young Masaccio, the figures of Gentile’s Polyptych of the Intercession and especially Ghiberti are his sources, proving how Mariotto’s figurative intelligence was enriched by all of the arts, beginning with sculpture.

Our painting can be dated to between 1421 and 1424[viii]: by comparing it with the 1421 Panzano Triptych[ix], from which some of the figures have been apparently drawn. We note that in our panel the shapes and the tones have been refined and are now more precious. The light of the gold enhances the dreamy nature of the Holy Conversation so that some parts, such as in the folds of the garments, the leafy inserts are in-woven with precious colours (such as the magnificent ochre of the Child’s cape). This panel, therefore, is closer to Gentile’s models rather than to the Panzano Triptych, even if they have clearly been interpreted with Florentine shapes. A second term of comparison, evoked in a written comment on our panel by Gabriele Fattorini[x], is the 1424 polyptych today part of the collections of the Museum of Palazzo Pretorio in Prato[xi] – previously in Palazzo Serristori in Florence[xii] –, usually considered to be Mariotto’s last work (on 14 April of the same year the artist dictated his own testament). At the end of his activity the painter consciously returns to the Organesque origins of his intial training: the figure of the Virgin of the Serristori Polyptych is quite close to the one of our panel. Yet, compared with the slightly earlier works, within the painting now in Prato, the linear refinements of the Late Gothic have been simplified. It is almost as if in his late works Mariotto, just as Masaccio, tends towards a ‘puro sanza ornato’ (pure without ornament): it seems that the artist, without renouncing gilding and maintaining the usual linear elegance, wants to achieve a synthesis that, in our panel, is certainly at its beginnings and that has not yet been consciously expressed. Therefore, this Madonna can be reasonably dated to between the two panels.

The panel presented in this brief essay is a small masterpiece of the late activity of one of the most important masters of the transformation of the Florentine painting between the Late Gothic and the early Renaissance, a miracle of synthesis between very different formal preconditions. The monumental individualisation of the severe figures of the saints attests to an already humanistic temperament, yet the setting, the outlines of the garments, and the damask curtain manifest the sublime resistance of the Late Gothic and its moving poetry. Mariotto, a painter that was ahead of his time since his early activity, is aware of the on-going revolution at the end of his life, and offers us a passionate interpretation of this transition.

[i] Longhi’s essay does not mention the owner of the panel. Longhi dates the panel to 1425, despite the fact that Mariotto di Nardo’s testament, published by Gaetano Milanesi, indicated that he died the previous year: G. Milanesi, Nuovi documenti per la storia dell’arte toscana dal XII al XV secolo, Florence 1901, pp. 78-79.

[viii] Sonia Chiodo recently suggested an earlier date for the panel, between 1415 and 1420 (as we can see in a written communication by Angelo Tartuferi, who confirms the dating to 1421-24).

Son of Nardo di Cione, Mariotto was born in Florence no later than 1366 – the year of his father’s death – and trained in his uncle Jacopo’s workshop. He must have already been quite popular in February 1389, when he became member of the Physicians and Apothecaries Guild, if Gemma, the widow of Matteo da Filicaia, commissioned a triptych from him for his husband’s funerary chapel in the Camaldonese monastery of Santa Maria degli Angeli in Florence. Since his early works the painter appears to be open to the influence of the various masters active in those years in Florence: first of all, his uncle Jacopo di Cione, the heir of the Orcagnesque tradition at the end of the XIV century, but especially Agnolo Gaddi and Spinello Aretino, the representatives of the transition to the Late Gothic and the authors of the most important fresco cycles in Florence of the last two decades of the century. In the mid-1390s, he collaborated with Niccolò di Pietro Gerini on the frescoes of the nave of the church of Santa Brigida al Paradiso and later in the decoration of the loggia of the Church of Orsanmichele. Around 1400, he worked in Pesaro with Lorenzo Ghiberti at the court of Pandolfo III Malatesta: thanks to the collaboration with the sculptor, which continued in Florence in the first decade of the XV century, Mariotto gradually adopted the stylistic models of the Late Gothic, as observed in his illuminations and stain glasses. His late works reveal the artist’s mastering of an even more elegant style, with refined gilding and lines that reveal the influence of Gentile da Fabriano’s masterpieces; yet it also attests to the painter’s regain of the Giottesque plasticism interpreted with a formal awareness that is already open to the new features of the Renaissance.