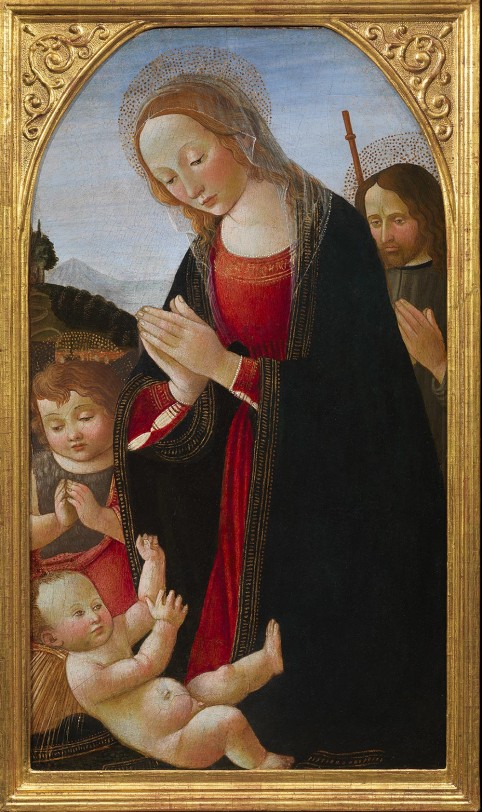 The Virgin and Saint John the Baptist pray to the Child, who spreads His arms towards His mother. While, behind them, Saint James prays isolated from the foreground. The midday light cancels the shadows to reveal a hilly landscape to the left, closed at the back by the outline of the mountains, coming out from the mist of the horizon.

The painting relies on a common iconographic typology present in Florentine painting at the end of the XV century, and first seen in a very famous painting by Filippo Lippi: the Adoration of the Child, previously set on the altar of the Magi Chapel in Palazzo Medici in Florence around 1460 and today part of the collection of the Gemäldegalerie in Berlin[i]. The Florentine workshops active in these years, when Florence underwent a strong awakening of spiritual devotion just before the experience of the Republica inspired by Girolamo Savonarola, selected the central part of Lippi’s composition as a model for the type of panel as an instrument of prayer adopted in the houses of the middle and high bourgeoisie. In this historic moment, at least in Florence, art was not considered an exclusive privilege of the rulers or the richest families of the city; commissioning an artistic object became a practice for a wider social class, following the aesthetic disposition of the Medici family – as a means of political achievement, of course – to imitate the lifestyle and language of the rulers. It does not come as a surprise that the most widespread iconography for panels destined for private devotion in such a socio-cultural context was drawn from the painting placed upon the altar of the Medici’s private chapel.

Our painting stands out for the presence of Saint James Major placed behind the protagonists: one of Christ’s most trusted apostles, he became a pilgrim in Spain after the death of the Redeemer to spread His Word and died, according to the Golden Legend, in Judea during Herod Agrippa’s persecution, thereby worshiped as the first martyr. His followers stole and carried his body to the coast of Galicia, and the pilgrimage to his shrine, near Compostela, became one of the devotees’ most common means of redemption, just as the pilgrimages to Jerusalem and Rome. Therefore, James could have been the eponymous saint of the patron of this panel, or he might indicate the patron’s participation in the ‘Way’, thus explaining his presence[ii].

Our panel expresses the refined taste and very high quality of all the workshops in Florence, not only the most famous ones, at the end of the XV century. Everett Fahy identified it as a work of the precious anonymous artist known as the ‘Master of the Fiesole Epiphany’. The oeuvre of this artist, which has often been attributed to Filippo di Giuliano (1447/1449 – 1503), an unacknowledged artist – yet there is still no documentary evidence referring to known works–, was constructed by Fahy after his 1967 research on the paintings of the Gambier Parry collection in London, just purchased by the Courtauld Gallery[iii]. A panel that is quite similar to ours, except for the different aspect of the landscape – the mountains are closer – and the presence of Saint Peter Martyr instead of Saint James, was part of the collection[iv]. Fahy assigned this painting to a painter close to Jacopo da Sellaio, who was quite active in Florence during the last three decades of the XV century; he was the author of many anonymous altarpieces, including the important and great Adoration of the Magi with Saints Paul, Francis and John the Baptist, and two donors, made for the Dominican convent of San Jacopo in Ripoli, today in the church of San Francesco in Fiesole[v]. It was the scholar’s belief that the style of this master recalled the features of the works of Jacopo da Sellaio; nonetheless, it revealed less enamelled and more natural colours, and reinterpreted formal impressions inspired by the Florentine tradition, from Beato Angelico to Cosimo Rosselli. The panel in the Courtauld Gallery was compared to our painting, which Fahy knew from a photograph in the Frick Art Reference Library[vi] and previously owned by the French art critic Marcel Nicolle (1871 – 1934). The panel passed through the John Levy Galleries in New York and was then sold at a Christie’s auction, still as a work of Jacopo da Sellaio[vii]. Only when Fahy inserted the panel in the catalogue of the Master of the Fiesole Epiphany, published at first in the volume of the followers of Ghirlandaio[viii] and then in a monographic contribution on this author[ix], was the matter of the attribution was finally solved. Today, the panel is irrefutably considered one of the master’s most important paintings destined for private devotion.

Although important traces of the value of the Master of the Fiesole Epiphany were visible in works made for religious establishments – such as the aforementioned altarpiece today in Fiesole or the panel with the Madonna and Child with Saints Andrew and Denis and the Blessing Christ, painted with Davide Ghirlandaio for the Spedale di Orbatello in Florence (today in the Museo degli Innocenti)[x] –, his qualities are more confidently tangible in his private commissions: our artist benefited from the appreciation of the Dominican convent of San Marco in Florence – where Girolamo Savonarola was a lector and preacher –, to which, as Anna Padoa Rizzo correctly noticed, our artist was connected, as attested by the great number of devotional works painted for the market[xi]. They reveal the painter’s ability in balancing the different impressions that were present in Florence, in a moment when many workshops were competing with each other, and none managed to gain leadership. The graphic characterization of the outlines, revealing a spontaneous drawing, as the infrared analysis of our work confirmed, recalls firstly Cosimo Rosselli, then Sandro Botticelli and Filippino Lippi. Yet, the plasticity of the figures brings to mind the works of Ghirlandaio and his workshop. The attention to the details of the surface recalls precedents of the first half of the century, from the masters of the Late Gothic to Beato Angelico. The presence of gold strokes in the halos, and in the foliage of the trees on the hill on the left side, to almost recreate the decoration of the Late Gothic layer, comes as a surprise in a painting made in the last quarter of the XV century; nonetheless, there are other gold decorations along the wavy hem of the Virgin’s cloak. The extraordinary conservation of the painting allows us to appreciate a work that conveys the decorative feature achieved by the formal intelligence of this master, here much more visible than in other works made in the same years – such as the aforementioned Gambier Penny panel or the Madonna with Child, Saint John and Two Angels of the Fundacja Ksiazat Czartoryskich in Krakow[xii]. This painting presents the model of elegance that has been the leitmotif of most Florentine painting during the XV century, and reveals the aesthetic dream of a civilization that already perceived the approaching of a crisis of certainties.

Critique has often associated our master, an anonymous artist active in Florence and its region since circa 1470, with the name of Filippo di Giuliano, known in Florence as Jacopo da Sellaio’s collaborator; unfortunately, there is no documented mention of his works. The personality and oeuvre of the Master of the Fiesole Epiphany were identified for the first time by Everett Fahy, in a 1967 contribution on some paintings previously in the Gambier Parry collection, purchased by the Courtauld Gallery in London. It was Fahy’s belief that the author of the panel with the Madonna in Adoration of the Child with Saints John the Baptist and Peter Martyr, both of which are in the same collection, were also part of the altarpiece with the Adoration of the Magi with Saints of the church of San Francesco in Fiesole. Therefore, the master was named after this important work, revealing his training with Cosimo Rosselli and his keeping up to date with the Florentine masters of his time – amongst all, Sandro Botticelli and Domenico Ghirlandaio. The oeuvre of this artist, which today includes of many works, defines a prominent figure of Florence in those years, likely connected with the Dominican convent of San Marco, but mostly a painter of private devotional commissions. This author’s impressive decorative intelligence is tangible in his medium-sized panels, all equally worthy of comparison with the most innovative Tuscan masters of the end of the XV century.