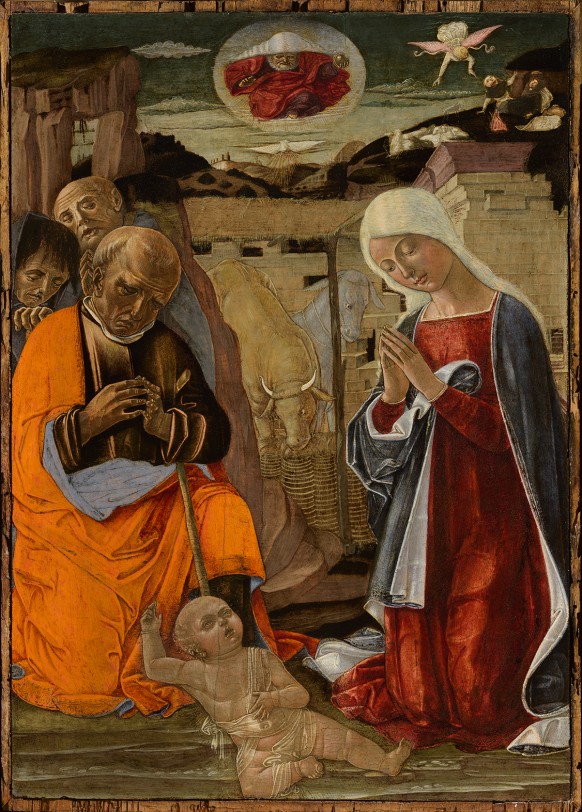 The Child, depicted as a large baby, is on the ground and looks towards the Mother, who kneels to pray to Him. On the left, Joseph is near a rock, with two shepherds behind him, suspended between respect and curiosity. Above, God the Father, with the globe in His hand, irradiates the scene through the Holy Ghost, while on the right the angel wakes two shepherds, asleep in front of a fire, to announce the birth of the Saviour.

This panel is certainly one of the most important paintings of this publication, and a remarkable example of painting in central Italy in the last decades of the XV century. It is a famous work by Sienese artist Bartolomeo di Giovanni, displayed until 1992 at the J. Paul Getty Museum in Malibu; it returned a few years later in Italy after being auctioned at Christie’s in New York[i]. It is worth dedicating consideration to the reconstruction of the panel’s passages from one collection to another throughout almost a century and to discuss the relevant critical debate in order to highlight its historical and formal value.

Before 1917, the panel was part of Sir Philip Burne-Jones’ prestigious collection in London. While a good painter, he is especially known for being the first son of Sir Edward Burne-Jones, an acknowledged genius of the art of the Victorian era and first inspirer of Aestheticism and Symbolism, and Georgiana Macdonald. At the death of his father, Philip inherited his title and the aesthetic taste for a model of beauty drawn from the Italian paintings of the XV century. His father had been a follower of Ruskin, who had discovered in Italian art a temperament of nature that had gradually faded after the XV century[ii]. Philip pursued alongside his mother, Sir Edward’s first biographer[iii], his father’s aesthetic ideas – those of the Pre-Raphaellite Brotherhood of the mid-XIX century – into the new century, manifesting them both in his portraits, animated by in-depth studies of his collection as well as Florentine painting, from Botticelli to Andrea del Sarto. Upon his death in 1926, the collection was auctioned at Sotheby’s[iv], and several Tuscan paintings dating to the end of the XV century – many from the school of Botticelli – were listed in this catalogue, excluding the panel examined here, one of the most remarkable items of the collection. At the time it had likely passed at first in the London gallery of the antique dealer Joseph Duveen, then to the collection of the lawyer Samuel Untermeyer in New York [v]. The first historiographical mention of our painting appeared on the catalogue of the 1917 antiques exhibition of the Kleinberger Galleries in New York: a version derived from our panel, of a visibly lower quality, previously brought to the critics’ attention as a work of Benvenuto di Giovanni by Frederick Mason Perkins[vi], was displayed on this occasion[vii]. In the brief essay dedicated to this replica, Osvald Sirén and Maurice Brockwell claimed they had previously seen our painting in London, for sale at the time– probably at the Duveen Gallery –, and suggested attributing it to Benvenuto’s son, Girolamo, active in his father’s workshop from circa 1490.

In 1940, upon the death of the lawyer Untermeyer, a famous political personality of the Democratic party and friend of President Roosevelt, the painting was sold, along with the whole collection, to the Park Bernet Galleries of New York, with the now usual attribution to Girolamo di Benvenuto. Jean Paul Getty purchased it – through the intercession of Duveen – and, at first, brought it to Sutton Place in England and later donated it to his United States museum[viii]. Our panel was again attributed to Girolamo in every museum catalogue[ix], as well as in Bernard Berenson’s Indexes[x]. Thanks to Burton Friedericksen – who mentioned in turn an opinion of Federico Zeri – the panel was traced back to Benvenuto’s oeuvre and dated to around 1480[xi], the years of, according to a known opinion of Ferdinando Bologna[xii], the painter’s ‘Paduan’ activity. After Fredericksen and Zeri’s Census[xiii], the painting has always been published with the correct attribution to Benvenuto.

The artist was born in Siena in 1436 and likely trained in the workshop of Lorenzo di Pietro, called Vecchietta (1410 – 1480). Autonomously active in 1453, Benvenuto continued to collaborate with the master on several occasions, as attested by his involvement in Vecchietta’s three large scenes in the apse of the Baptistery of San Giovanni[xiv]. In 1466, he painted the large panel with the Annunciation between Saints Michael and Catherine of Alexandria for the Church of San Girolamo in Volterra[xv]. In this work the variety in the formal style that characterized the painter’s whole career is already visible: just as Matteo di Giovanni, Benvenuto turns to the Sienese tradition of the XIV century for the composition of his figures, but at the same time cites mid-XV century Florence and the culture of northern Italy, with a quality that recalls, even if indirectly, Mantegna. Thanks to the presence of the two great artistic personalities of Liberale da Verona and Girolamo da Cremona, Siena was becoming an artistic centre undoubtedly connected with the same formal experimentations that were developing in the Po region and, through some derivations, in Umbria and Marche.

The models of Liberale appear, at first, in Benvenuto’s miniatures; yet, we also perceive what we could be defined as a ‘Squarcionesque’ temperament – having arrived in Siena with the Veronese master – in a panel, likely the most appropriate precedent of our painting: the 1470 Nativity made for the Convent of San Girolamo in Volterra, today in the Pinacoteca Civica[xvi]. In this work, Benvenuto introduces (at least in his oeuvre) an iconography that is later reproduced in our panel: Saint Bridget of Sweden’s vision of the Nativity experienced during a 1372 pilgrimage to Bethel – she narrates the episode herself, yet there was a small libello with the Latin translation of the Swedish. The Scandinavian saint was particularly worshipped in Siena due to her close relationship with Catherine in Rome, during the last year of her life[xvii]. In Bridget’s vision, God the Father and the Holy Ghost illuminate the Child, having just been born in front of a cave, amongst the prayers of the mother, Saint Joseph and two shepherds, seen from above. Benvenuto reproduces the scene almost identically, depicting the figures frontally and indulging in a linear plasticism that recalls Donatello’s mature works, both in Florence and Padua. As previously stated, the painting dates to 1470, at the beginning of a very important decade for both Sienese painting and Benedetto’s career: the figure of Francesco di Giorgio gains favour, and more commissions generally undergo a generational change. Benvenuto works on the frescoes of the Ospedale di Santa Maria della Scala as well as the sumptuous panels depicting the Annunciation for the church of San Bernardino in Sinalunga[xviii] and the large altarpiece for the Borghesi family in the church of San Domenico in Siena (today dismembered)[xix]. According to Maria Cristina Bandera, a series of works for private devotion, including our panel, were painted in the second half of the decade. It is the mature phase of our painter’s activity: he manages to synthetize in smaller dimensions influences drawn from his direct experience with Francesco di Giorgio, which he had already adopted and made his own, visible in the simplification of the composition and the plastic vigour of the figures – some of which, such as the Virgin or the bald shepherd behind Joseph, recall Martini’s panel with the Nativity with Saints Bernard and Thomas Aquinas, painted during the same years, today at the Pinacoteca Nazionale in Siena[xx].

Our painting, close to the Pietas of the Berenson Collection in Villa i Tatti in Fiesole, is a pivotal example of the cultural contaminations in central Italy during the 1470s. It does not come as a surprise that throughout the centuries, and especially in the XIX century, works such as ours have been considered expressions of the ‘Italian manner’, as it was defined at times by Anglo-Saxon culture. It is suggestive to conclude this essay with a historical hypothesis, which cannot be verified due to the lack of documents, but that could be plausible and extraordinarily fascinating: as Bandera suggested, the panel that would have later joined Philip Burne-Jones’ collection might have been purchased by his father Edward during one of his stays in Siena in the 1870s. In the eyes of a great artist who found a continuous source of influence, especially with regards to sentimental inspiration, in Italian painting, Benvenuto’s Nativity was a tool of introspection in the dreamed Middle Ages, where the simplification of the shape suggested the return to the origin of Christian values, and, therefore, to the artist’s eyes, a total palingenesy of the human spirit.

[iv] Sotheby’s, The Property of the Late Sir Philip Burne-Jones. Sold by Direction of the His Executors, London, 8/12/1926.

[v] The details on the passages from one collection to another are from the auction catalogue of the Untermeyer collection: Parke-Bernet Galleries, The Untermeyer Collection, Owned by the Late Samuel Untermyer and His Children: Paintings, Gothic and Renaissance Furniture, Tapestries and Other Works of Art, New York, 10-11/5/1940, n. 48.

[viii] B. B. Fredercicksen, D. D. Davisson, Benvenuto di Giovanni, Girolamo di Benvenuto. Their altarpieces in the J. Paul Getty Museum and a summary catalogue of their paintings in America, Malibu (CA) 1966, p. 18.

[x] B. Berenson, Italian pictures of the Renaissance. A list of the principal artists and their works, III, Central Italian and North Italian schools, London 1968, I, p. 187.

Born in Siena in 1436, the painter is first recorded as an autonomous artist in 1453, when he is recorded as working on the fresco decoration of the Baptistery of San Giovanni. He likely trained in the workshop of Lorenzo di Pietro, known as Vecchietta, with whom he collaborated until the 1460s. Benvenuto’s early works are inserted in the cultural ferment during the years of the election of the Sienese Enea Silvio Piccolomini as pope and the consequent prestigious commissions for the artists of the major cities of the Republic. In particular, the presence in Siena of painters and miniaturists from northern Italy was pivotal in the definition of Benvenuto’s style, as it reveals a harmonic combination of various impressions. Since circa 1475, his works display more clearly the influence of Francesco di Giorgio Martini, visible in the increased plastic energy of the profile of the figures: the triptych with the Enthroned Madonna and Child with Musician Angels, and Saints Peter and Nicola from Bari, today at the National Gallery in London, and a series of precious paintings of smaller dimensions, made to meet the requests of a large network of private commissions, all stand out in this phase. Benvenuto’s models became widespread, indicating the importance of his workshop, into which the autonomous personality of his son Girolamo entered in the last decade of the century.