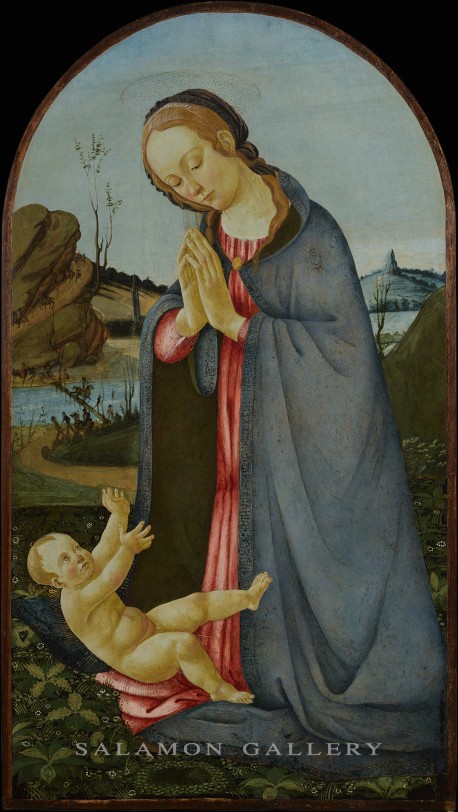 In a landscape not far from a riverbed, crossed by a wooden bridge, the Virgin is portrayed at full length, her hands held in prayer towards the Child. He is lying on the ground on the hem of her mother’s robe and he is stretching out his hands towards her, in a domestic love gesture which dilutes the sanctity of the Adoration theme. In the background to the left, a merry cortège of richly dressed knights and infantrymen unfolds; they seem to be walking from the mountains towards the river (and across the bridge) to pay homage to the birth of the Saviour.

The textual origin of this type of composition, one of the most common in devotional painting in Tuscany in the second half of the Quattrocento, is to be found in one of the Revelationsby Saint Bridget of Sweden[i]. The Scandinavian devout lady, founder of the San Salvatore Order, had had a miraculous vision of the Nativity whilst on a pilgrimage in the Holy Land. Once back in Rome, she dictated the memoirs of her ecstasies and the booklet became truly famous, also thanks to the momentum of her friend and disciple Catherine of Siena. Saint Bridget says: “I saw the glorious baby lying on the ground, naked and bright. His body was pure and devoid of any type of dirt and impurity. I then heard the angels singing, and it was miraculously sweet and supremely magnificent.” According to the Saint, the miracle of the Nativity is thus expressed through the naked body of the infant Jesus, uncorrupted and shining, to whom the Virgin addresses her prayers. The two renowned Adorationsby Filippo Lippi are informed by this image – the one carried out for the altar of the Magi Chapel in the Medici Palace in Florence (now at the Gemäldegalerie in Berlin) and the second, for a cell in the Camaldoli monastery (Florence, Uffizi)[ii]– leader of an iconographic tradition that sees many painters specialising in this subject. There exist many Adorations, which heavily depend on Lippi’s prototypes, by the master known as Pseudo Pierfrancesco Fiorentino – Zeri points out, however, that it was not the output of an individual artist alone, but of a workshop which operated with many cartoons and models by Fra Filippo and Pesellino[iii]; Agnolo di Domenico di Donnino (also known as the ‘Master of Santo Spirito’) also executed several examples, as did the Master of the Jonhson Nativity and, chiefly, Francesco Botticini.[iv]  The most important artist who engaged with this theme is undoubtedly Jacopo del Sellaio, the author of this painting.

Jacopo di Arcangelo, called ‘del Sellaio’ – saddler – in view of his fathers’ job, was born in Florence in 1441[v]. His family introduced him to the Society of the Confratenities – his father Arcangelo was an active member of the ones in Santa Maria del Carmine and San Frediano – and he is documented as an artist from 1472 onwards, first on his own and then together with the older Filippo di Giuliano – the latter is now identified with the painter known as the Master of the Epiphany of Fiesole. And yet this was only the first collaboration that saw him working with Biagio d’Antonio, Bartolomeo di Giovanni and Sandro Botticelli over two decades.  Most probably having trained with Lippi – as maintained by Vasari – Jacopo becomes one of the most relevant artists of Florentine painting in the second half of the Quattrocento, primarily of that “workshop civilisation” featuring the repetition of formal modules experimented by the masters of the previous generation, thus the rather extensive diffusion over a somewhat large patronage, seen in works which immediately became models of elegance and refinement.

In what is possibly the most famous of the Adoration of the Christ Childby Jacopo, the panel held at the Walters Art Museum in Baltimore (inv. 37754), Lippi’s model of the Medici Chapel is modernised with a more concise rendering: in Sellaio’s work, Young Saint John joins the Virgin in praying, instead of looking at the observer, this way highlighting the even more devotional nature of the described scene.[vi]Ultimately, Jacopo takes inspiration from Lippi’s work to create a new iconography, then repeated with many variations – for instance the elimination of the figure of the Baptist, or more rarely substituting him with the profile of the same Saint as an adolescent. The landscape, coming to life thanks to divine intervention, is often lush and illuminated by a clear sky: the attention the artist dedicates to its portrayal is remarkable. In other versions, such as the one in this painting and the panel once in the John G. Johnson collection, now at the Philadelphia Museum of Art[vii]– the latter a comparison confirming that our panel can be linked to Jacopo – the blatant contrast between the bare rocks of the mountains in the background and the lush grass with recently bloomed flowers in the foreground is blatant. However, if the isolated figures of Saint John the Baptist (adult) and Saint Jerome walk along the routes descending from the crags, with the shepherds and the Three Kings in the background, here we see a proper, classically inspired cortège. We are reminded of the Triumphsthat Jacopo inserted on the front panels of the cassoni he carried out himself, especially at the time of the collaboration with Bartolomeo di Giovanni. The same lilting rhythm of the infantrymen’s and knights’ profiles can be seen in the figures of the panel representing the Reconciliation between the Romans and the Sabines, from the same Johnson collection[viii], implying that the artist tended to insert elements of his classic repertoire even in works of a different nature.

Besides, being able to embark upon diverse themes with the same narrative and anecdotal formal reasoning, at the same time displaying a highly refined countenance - recalling Neoplatonic intellectual preconditions – is one of the prerogatives of Jacopo’s art, as well as being the most plausible reason of his fame. In the Florence of Lorenzo the Magnificent, references to Latin culture were required even in works aimed at private devotion. Adopting a more colloquial and affable rendering than his friend Sandro Botticelli, he could certainly stand out as the most skilled spokesperson in disseminating the models of this outstanding cultural era.

This panel was recorded at the D’Atri Gallery in Paris in 1949. At that date, in a written communication, Lionello Venturi suggested the attribution to Jacopo del Sellaio. Federico Zeri shares this reference, inserting the image of the painting in the corresponding folder in his photo library[ix].

[vi]F. Zeri, Italian paintings in the Walters Art Gallery, Baltimore 1976, I, pp. 97-98, n. 61. Another painting in the same museum is worth mentioning, in view of its composition similarities with our painting: the Adoration of the Christ Child, now overwhelmingly considered as stemming from Jacopo’s workshop (inv. 37631).