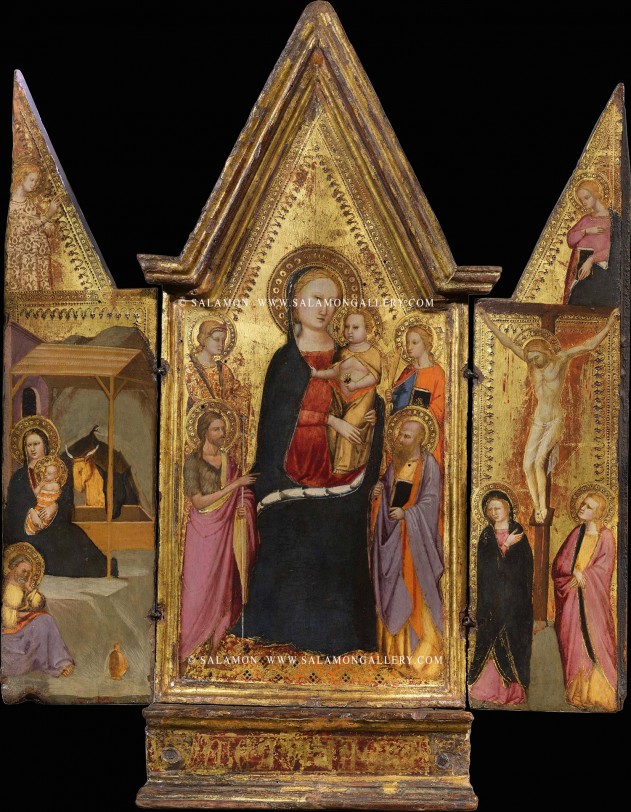 The central panel of this exquisite triptych displays the Virgin at full length, while she tenderly supports the Child; for his part, He clasps a white carnation in his left hand, while holding the helm of his Mother’s mantle in the right one.  To their sides, Saint John the Baptist and Catherine of Alexandria are to the left, with Saint Paul and another martyr saint, whose identity is hard to determine, on the opposite side – it may well be Justina or the more uncommon Claudia – featuring the emblems of the book and the palm. The side panels and the endings portray the Annunciation, the Nativity and the Crucifixion, emphasising the narrative and doctrinal tone of the altarpiece, as it illustrates the history of Christ.

Scholars have known about this work for almost a century: it was with Thomas Harris Ltd in London in the years 1935-36 and was then documented on the Milanese market, with the Brunati Gallery, in 1937. Such indications can be drawn from the reverse of the image depicting the panel, now at the Archive of the ‘Corpus della Pittura Fiorentina’ Association, formerly in the personal photo library of Richard Offner[i]. The art historian of Austrian origin himself suggested a reference to the Master of the Misericordia for this painting. That was the name he had chosen for an artist he had identified in 1956[ii], in view of the Virgin of the Misericordia, Christ Giving His Blessing and Angels, a panel in the Galleria dell’Accademia collection in Florence, considered the leading work of the reunited stylistic group[iii]. Sadly, Offner never published the complete catalogue of the artist – his pupil Hayden B.J. Maginnis will see to that[iv], sixteen years after the death of the founder of the Corpus of Florentine Painting, clearly including the present painting in the group of works; and yet, in the meantime, the name of the Master of the Misericordia had become ordinary in the research scenario on Florentine Trecento. Roberto Longhi had renamed him ‘Master of Saint Eligio’, associating the Galleria dell’Accademia panel to the sections depicting the stories of the aforementioned Saint, formerly in the Cambò Collection in Barcelona, now at the Museu Nacional d'Art de Catalunya[v]. Federico Zeri recognised some features in the group of paintings collected by Offner that set this artist close to Agnolo Gaddi’s beginnings[vi]; Boskovits suggested identifying the painter with Giovanni Gaddi, the son of Taddeo and older brother of Agnolo, whose name is often found in Florentine documents from 1362 to 1385, of whom no signed work or any other one certified by sources survive[vii].  Thanks to more recent research carried out by Angelo Tartuferi[viii] and Sonia Chiodo[ix] (who dedicated one book of the Corpus to the author) it was possible to trace the several phases in the activity of this master, a major protagonist of the arts in Florence in the third quarter of the Trecento. He presumably trained in contact with Bernardo Daddi just before the onset of the Black Plague – during which Daddi lost his life; in the 1350s Giovanni fell under the influence of Andrea di Cione, called Orcagna, and then gradually moved towards a less strict interpretation of Giotto traditions, thanks to the deployment of the soft, radiant emphasis on colour of Giottino and Giovanni da Milano.

The present triptych belongs to the most refined phase in the activity of this master: the variety of expressions and portraits suggest a firm step forward if compared to the more hieratic poses of solid objects, that he had adopted in previous Orcagna-inspired works.  This is most probably the seventh decade of the century, not far from the aforementioned Galleria dell’Accademia panel, giving the name to the master: it is thus the most authentic and recognisable phase of his unique manner. A comparison with the altarpiece now at the Pushkin Museum in Moscow (inv. 230)[x] immediately springs to mind, where the figures are arranged in the same way. And yet, the increasing number of characters in the central sequence of the Moscow panel removes the Giottoesque plasticity from the group of the Virgin and Child that, instead, plays a leading role in the definition of figures in the present work.

Having rediscovered this panel, previously only known thanks to old photos, and whose extremely sound state of conservation can now be appreciated, we can shed some highly relevant light towards a fuller understanding this formidable artist’s career.

[i] See S. Chiodo, A critical and historical corpus of Florentine painting, IV, IX, Painters in Florence after the ‘Black Death’. The Master of the Misericordia and Matteo di Pacino, Florence 2011, p. 157.

[iv] H. B. J. Maginnis, A critical and historical corpus of Florentine painting, V, I, A legacy of attributions, Florence 1981.