Landcape with Magicians in a Marine Landscape, c. 1715 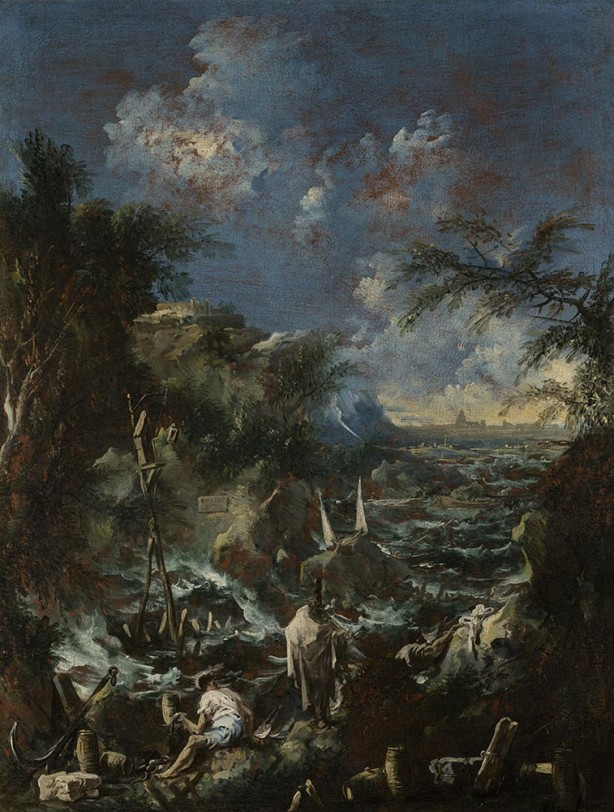 In a landscape opening up onto a cove, lapping the lush vegetation grown close to the rocks, two figures stand on the foreground: a commoner, most probably a fisherman who escaped the wreck of his ship, and a sorcerer, conceivably summoned to appease the storm with his divinatory art. The early Romantic nature of this painting, featuring glimpses of blue sky heralding finer weather, while the waves, feathered by the wind, keep on breaking onto the crags, dragging the goods contained in the hull of the ships ashore – in this respect, the barrels and bundles on the foreground to the left, akin to a still life, are extraordinary – informs of a culture that, in the XVIII century, still takes inspiration from the Seicento theory of affection. This time, however, it brings about a new representation of landscape, by then exuding the unpredictability and impetuosity of human passions.

This painting is part of a conspicuous series of works carried out by Alessandro Magnasco and by the Marche-born landscape painter Antonio Francesco Peruzzini (1643 – 1724), all of which can be easily compared from a formal point of view, as well as for the mysterious and poetic nature of the portrayed subjects. Peruzzini trained in his father’s workshop in Ancona and soon travelled north and then to Florence, where he was influenced by the tradition of Salvator Rosa and the Tuscan Seicento landscape artists[i]. The collaboration with Magnasco took place in Milan around 1690 and was reiterated on several occasions in the first quarter of the following century, first in Florence and then in Milan[ii]. In Tuscany, at the court of Ferdinando de’ Medici, Peruzzini worked with Sebastiano Ricci, as well as with the Genoa master, in an exchange of suggestions based upon swift impression and execution, combined with a nervous, darting style, which would translate to landscapes and figures blown by the wind and carried out with quick brushstrokes by the two great painters of the beginning of the Settecento[iii]. Peruzzini’s freedom of expression and his taste for the picturesque, openly contrasting with the vision of a rarefied, contrived nature – popular in Rome at the same time thanks to Arcadia painters – made him the ideal collaborator for Magnasco’s poetics, which relied upon truthful suggestions. Ultimately, the figures portrayed by Magnasco and the stories he narrated postulated the imaginative and evocative setting of Peruzzini’s backdrop, as if the relationship between the two were similar to the one between a theatre author and his set designer.

Alessandro Magnasco was born in Genoa in 1667[iv]. The son of a painter, Stefano, who died prematurely when Alessandro was only five years old, he moved to Milan as a young boy and soon entered the workshop of Filippo Abbiati. The latter was the most baroque and “Bernini-inspired” among Milanese artists: Magnasco borrowed the taste for the dramatic contrasts between light and shade from Abbiati, as well as an unrethorical nature of physiognomy, studied in its unaffectedness and promptness and alive with vital spirit. Towards the end of the XVII century, the painter specialised genre portraits, often inserting small figures in landscapes which had been exceuted by specialised assistants. His collaboration with Peruzzini started around this time, and it would last well over twenty years. Among the first works of this co-operation, the Stormy Marina with Fishermen, now at the Alte Pinakothek in Munich[v]is worth mentioning: Despite it possessing a more analytical and spacious composition – it is horizontal and not by chance so – the formal themes it refers to are reminiscent of our painting.

The latter was nonetheless executed considerably later, perhaps during his second Milanese stay: Marina with Figuresis most probably the painting it shows most similarities with, formerly in the Samuel Henry Kress Collection and now at the Lowe Art Museum in Coral Gables (Florida, USA), a canvas referred to the year 1712-13 and here replicated in the composition as well[vi]. Two companion pieces portraying Saint Anthony preaching the fish and Saint Augustine and the Mystery of the Trinitylook similar, as well, formerly in the historian Brenno Geiger collection[vii], as is the case with Christ saving Saint Peter from the Waters, at the Washington National Gallery of Art, executed slightly later. Overall, the marine theme suited the two painters well, often achieved by portraying a cove opening up the perspective onto fortified cities, set on the background to close in onto the horizon – since the luminous vibrations of their brush strokes aptly conveyed the momentum of a stormy sea and the agitation of castaways in search of safety. Aware of the Seicento landscape tradition, Magnasco and Peruzzini then brought forward formal premises that would be mainly admired by the Romantic culture, from the end of the Settecento onwards. It is no coincidence that, at the beginning of the XX century, the great collectors and admirers of Magnasco are two intellectuals, educated with the literature and philosophy of the Romantics, such as the Venetian Italico Brass and the “Venetian by adoption” Benno Geiger – the Berlin collector Paul Cassirer may also be included, and he hosted the first monographic exhibition on the master in his gallery in 1914. Notwithstanding, considering Magnasco merely as the clever painterly forerunner of Sturm und Drangwould not do him justice: taking in an active role in observing nature and the truth, Magnasco speaks to all eras, bringing us to a dimension that transcends history. By showing categories of the spirit which are always up to date, the Genoa master keeps on arousing emotions and guiding us, with his subtle brush strokes, giving ample insight into that sublime kaleidoscope that we call reality.