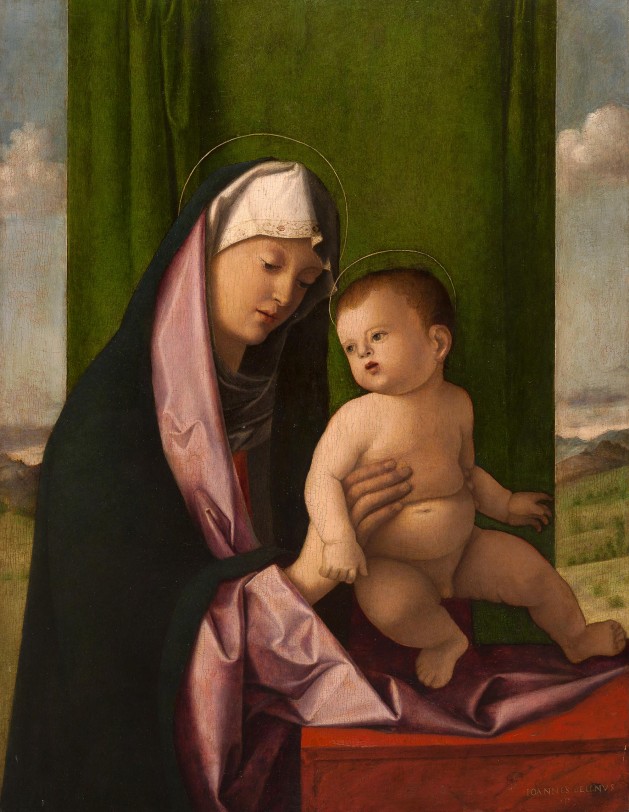 In front of a green curtain separating the foreground from a hilly landscape typical of the Veneto region, the Madonna is standing and lovingly holding the Child who is leaning unsteady on his feet on a red marble surface. This extraordinary panel, signed on the lower right by Giovanni Bellini (“IOANNES BELLNUS P.”), has been known to the critics for over seventy years. In 1946 Carlo Ludovico Ragghianti brought it to public attention in his Miscellaneous, collection of writings from World War II, in a contribution dedicated to this artwork[i]. This panel was the starting point for Ragghianti’s broader discussion on the connection of Bellini’s activity with the needs of private devotions, but also on the ease, present inside the master’s large workshop in Venice, of reproducing the compositions used by Bellini in the major panels, or parts of them. Hence Ragghiani focused already on the pivotal critical problem in studying this work: the identification of the autography of the master – Bellini, who, according to the historian’s opinion, even if he left to the workshop part of the making of the painting, fully promoted and approved the artwork as his own – and the relation of the painting with the prototype, identified in the Presentation of Jesus at the temple of the Kunthistorisches Museum of Vienna (inv. 117). In Heinemann’s corpus (1962), this painting isn’t included among the derivations from the Viennese panel (here considered in turn as a workshop copy of a lost original work) [ii], but in the 1991 Supplement the German author perfects the issue supporting the autography and dating the painting to around 1490 – and also lamenting an unnatural restoration of the Child’s head[iii]. More recently also Mauro Lucco and Peter Humfrey, who had wanted to present the panel on the last great exposition dedicated to Giovanni Bellini in Rome at the Scuderie del Quirinale[iv], confirmed the autography of our painting.

Therefore the analysis of the artwork has to inevitably start from the study of the model: the Presentation of Jesus at the temple, once in Bartolomeo della Nave’s collections in Venice, then in James Ist Duke of Hamilton[v]. The painting, today in Vienna, has been identified as the one of the over thirty versions of the subject – made following a single formal model – realized in Bellini’s workshop that show the highest quality, and therefore the only that could reasonably be ascribed to the master[vi]. Regardless, some of the above-mentioned artworks show the signature of Bellini, while others display the initials of direct pupils such as Francesco Bissolo and Vincenzo delle Destre. Other panels, instead, represent partial parts of the subject such as – besides our artwork – the painting once conserved at the Museo Civico of Padua and stolen in 1973, which Berenson properly attributed to Antonio Solario also known as Lo Zingaro (the Gipsy)[vii], or the one before in Emo Capodilista Collection and today at the Musei Civici agli Eremitani of Padua[viii], for which Heinemann mentions Marco Basaiti[ix]. The high number of these derivations clearly illustrates how Bellini’s workshop worked: the master was entitled of the invention, usually made on a prestigious panel, such as the one in Vienna. Once the prototype got a good reception, numerous smaller panels followed, sometimes signed and approved by the master himself; or sometimes, if also the underlying drawing ostensibly belonged to one of the pupils, he was entitled to sign the painting. Yet since the workshop was receiving numerous requests and at the beginning of the 1480s had become the most sought-after atelier of the Serenissima, the pupils had an important role also in the redactions signed by the master, to such an extent that nowadays the most useful tool to validate Bellini’s autography, or at least his participation in the artwork’s early phase, in this kind of repeated composition is the reflectographic analysis[x].

First of all the reflectographic analysis of our painting confirmed the originality of the signature; it also revealed the preparatory drawing underneath the painted surface, evident especially in the red sign above the Child’s left knee. There are also very visible pentimenti such as those on the right hand of the Madonna whose fingers are all duplicated in the reflectograpy. To be clear, the drawing doesn’t appear to be a mere copy of an original Bellini artwork, but rather an interpretation that, due to the nature of the painting and considering that it has been made inside the workshop, couldn’t have been painted by anyone else than the master himself. Besides, the critics have emphasized several times the ease of having placed in an open space a formal invention that in the prototype was set instead in a closed space. This decision implied an increased smoothness of the tones, avoiding the strong contrasts of the panel in Vienna, and it even meant that the graphic quality of the draperies had to be mitigated. The impression is that if the Kunsthistorisches Museum’s Presentation is a masterpiece that still presents the linear and abstracting aesthetics of the 15th century, in our case we are in a phase that is already preluding to Bellini’s naturalistic turn, and his subsequent evolution in the style of Giorgione. What changes, compared with the prototype and with most of the redactions, is the emotional tone of the holy representation, and this evolution can only be attributed to the change in the poetics of the master’s artworks at the beginning of the last decade of the century.

What suggests the presence of a collaborator is above all the nature of the faces, far from those of the various Madonna made by Bellini in the same period (for a comparison, lets just think of the Madonna of the red cherubims of the Gallerie dell’Accademia in Venice) and at the same time with more expressive features than the Presentation in Vienna: in this case we immediately think of a follower of Bellini, and particularly of a master who is quite recognizable in the context of his workshop around 1490: Antonio Solario also known as Lo Zingaro (around 1465 – 1530) already named for the Madonna of the Museo Civico of Belluno[xi]. If this is a clearly justifiable comparison, due to the identity of the model, it is even more significant to note that Lo Zingaro frequently repeats the formal modules in the definition of the faces: the profile of the Virgin, with quite almond-shaped eyes, appears in a very coherent way in the Virgin of the Rau Collection in Stuttgart[xii], and also in the later Madonna worshipping the Child of the Statens Museum for Kunst in Copenhagen[xiii]and in the famous Madonna Leuchtemberg, today at the National Gallery in London[xiv]. Solario’s journey began in Venice and continued in the areas of Lombardy and Marche, and brought him to quickly distance himself from the model of Bellini and to approach Leonardo and the painters of the area of the Po valley. Yet in his first years of activity his only reference is Giovanni Bellini: therefore nothing could be more likely that he is the painter chosen to conclude a composition that appeared to be, just as shown by the panel in Belluno, perfectly in line with his abilities.