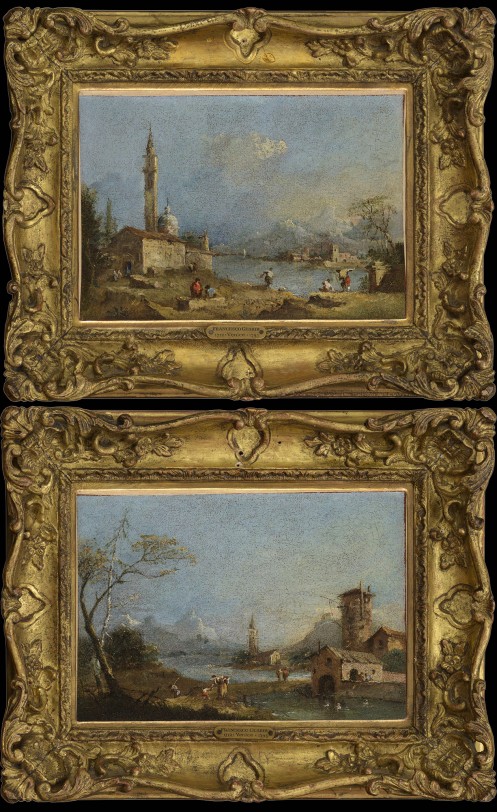 In the first of these two fantastic landscapes we find a lake view, closed on the horizon by mountains recalling the Focobon Group of the Eastern Dolomites; on the left we find a parish church featuring a belfry and a small round dome, with the apse set against a country house on the shore. Three women are entering the church, while two gentlemen, wearing a cloak, are talking resting after the out-of-town excursion; more on the right, three fishermen are busy with their rods on a hill peaking on the water. In the second landscape, the mountains closing the scene seem to be the same, but depicted from another slope: on the right side of the foreground there is a rustic tower, leaning against a lower structure (probably a mill); on the balustrade enclosing the lake a man and a woman are conversing; more on the left there are two wayfarer, a woman pulling the arm of a child and a just sketched figure; lastly, slightly behind is a parish church, featuring as well a slim belfry.

This couple of paintings, bright testimony of Guardi’s skills as a painter of mountainous landscapes, has behind an important history of passages of collection, at least concerning its last fifty years: formerly in the Charpentier gallery in Paris, the canvases passed in the Leonard Koetser Gallery in London and later became part of the collection of Lord Charles Forte (1908 – 2007), where they remained until the death of the entrepreneur – founder of the famous hotel group bearing his name.

Francesco Guardi’s activity as a landscape painter was studied only in quite recent times. If on the one hand his Venetian views, not much appreciated by his contemporaries, had been fully reassessed during the twentieth century mainly thanks to the collectors’ interest, on the other his rural landscapes have been taken into a specific consideration only in the last twenty years[i]. Furthermore, the methodological mistake of bringing together the capriccios and the so-called “fantastic views” often occurred inevitably downgrading the latters. Mitchell Merling’s recent contribution clarified the matter and the Venetian exhibition of the Correr Museum – organized for the tercentenary of the birth of the painter and in which a section was dedicated precisely to Guardi landscape painter – managed to fully show the modernity, in the layout and in the formal elaboration, of this kind of paintings[ii]. Essentially, Guardi’s capriccios proved the late eighteenth century taste for the ruins of the classic buildings – which of course resulted to be the protagonists of the framings chosen by the painter; in other words, they were clear testimonies of the proto-Romantic zeitgeist in Europe which interpreted the classic world with the melancholic spirit of Goethe and Schiller. The “fantastic views”, such as ours, were instead signs of Guardi’s love for a tradition that, from Guercino to the Ruysdaels and Dalft’s painters, had put at the centre of the landscape painting the emotional participation of the viewer. As know, Guardi didn’t use the camera obscura and consciously renounced to the accuracy of the view, to the benefit however of a retrospective reflexion on the six-seventeenth century painting and art. The buildings depicted in our canvases appear to have been gathered not from the truth, but rather from Jan Both and Adam Pynacher’s Italian landscapes, yet filtrated by the observation of Canaletto’s engravings and translated in a setting that was better recognisable to the Venetian public. This results in a “studio landscape”, in which the experience of nature is contemplated not through a systematic and philological but rather through a lyrical layout.

It doesn’t come as a surprise that the most relevant comparison for this kind of composition was found in the early paintings of John Constable, ideal heir of Guardi in conveying, through the vibration of the light, the vivid impression of the movement, in which of course the figures, just as the natural elements, are involved.

The dating of our landscapes to Guardi’s the late activity, suggested by Antonio Morassi[iii], is still today the most reliable one. Sure enough, in his last decade of life the painter reaches the top of his pictorial liberty and of his ease in the usage of models. The two canvases can therefore be easily referred to this lucky season, twilight of the extraordinary career of the artist.