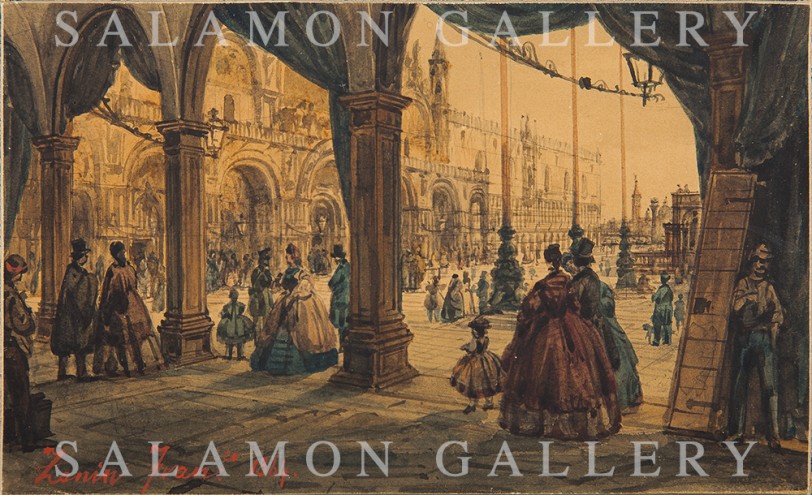 The façade of the Basilica of San Marco in Venice and the side of the Palazzo Ducale are represented from an unusual point of view situated under the portico of the Procuratie Vecchie, just before the junction of the Merceria dell’Orologio. In the Piazza, where the bronze-based flagpoles stand to represent Venetian citizenship and its history, small groups of variously dressed figures are gathering: their hairstyles, especially the women’s, appear to recall the 18th century fashion, in an atmosphere that on the whole doesn’t seem to be set in a past time but rather participate to the contemporary life of the second half of the 19th century.

This beautiful painting bears on the lower left Francesco Zanin’s signature and the date 1864. The handwriting is almost always in the same part of the composition, on the lower left edge, in most of this artist’s paintings – and perfectly located in time: it is therefore a document of costume on life in Venice during the last years of the Austrian domination, when a real renovating fervour animates the city. This is the period when the Academy Bridge and the Scalzi Bridge are built to allow people to move more conveniently also by feet from one sestiere to the other. And this is the period when Venice finally ends its thousand-year old history of road isolation especially thanks to the train bridge to Mestre and to the construction of the station on the site where the church of Santa Lucia used to be (it had been demolished in 1861): the city, who could now be reached by land, experiences an extraordinary increase in number of travellers and tourists, clearly to the benefit of hoteliers and commercial activities. The porticos of the ancient Procuratie in Piazza San Marco (the “old” ones achieved during the first half of the 16th century designed by Jacopo Sansovino and the “new” ones built a century later following the drawing of Vincenzo Scamozzi) become crowded with cafes and gathering points, while on the Mercerie (the arterial roads leading from the Rialto Bridge to Piazza San Marco) elegant fashion boutiques replace the small artisanal workshops. In this phase the artists appear to be perfectly aware of experiencing a period of great transformations. Therefore on the one hand they tend to seek in the tradition the identity-making certainties whose ongoing crumbling they perceive; yet on the other they are also fascinated by this excitement for the novelties. The landscape paintings – and since the years of the Republic the Venetian tradition obviously identified itself in this genre more than any other – made in this phase bear the sign of this dual intellectual attitude[i]: on the one hand there is the decision of copying Canaletto’s and Guardi’s landscapes, almost as if the artists wanted to crystalize through the copies the memory of the last season of the Serenissima, yet on the other, in the landscapes elaborated from concept to execution, such as ours, the citizens become protagonists, with the full-scale human figures – and not made smaller on purpose as in the 18th century – to interpret through their daily life the sense of change and of historic metamorphosis that could be felt in Venice in those years.

Francesco Zanin, a painter who had been unfairly ignored by the critics for over a century and later rediscovered for his value during the last decade in several contributions, is a distinguished witness of the Venetian cultural atmosphere from mid-century to the beginning of the 1880s[ii]. He was indeed at the same time one of Canaletto’s most valid copyist and one of the most perceptive interpreters of his time. The habit of signing his artworks and his great productivity – especially in the mature phase of his career – causes his name to be one of the most present on today’s markets. The productions on canvas, and the aquarelle on paper works, are remarkable. Not unfamiliar with photographic knowledge, his style stands out for the ease of the chiaroscuro passages with a ratio between lights and shadows in the pursuit of the frankness of the usage of the paintbrush that brings his nature close to the landscapes of Federico Moja, his master in the architecture drawing at the Academy of Fine Arts of Venice[iii]. In our sheet the selection of a point of view from under the portico recalls precedents in the style of Canaletto: the impression on the light, investigated with an admirable lightness of the brushstroke – which becomes even more subtle in the distance – is emphasized by the contrast with the shadow on the foreground, just as in Canaletto’s famous Capriccio with portico in perspective, today at the Galleries of the Academy, and it is no coincidence that this composition is one of Canaletto’s most copied by Zanin[iv]. The human figures, depicted with very quick outlines, show that most likely the painting had been elaborated from real life drawings. The fantasy of the garments’ styles is influenced by the poetics of the neo-eighteenth century that Meissonier in Paris and Guglielmo Ciardi (among others) in Venice were experimenting in those same years. Yet we don’t perceive any trace of melancholic elegy; what emphasizes the poses of the figures of this snapshot is a nervous feature of movement, almost to communicate us and make us part of the restlessness felt among the ongoing clamour of the citizens, in the shadow of the motionless and eternal “stones of Venice”.