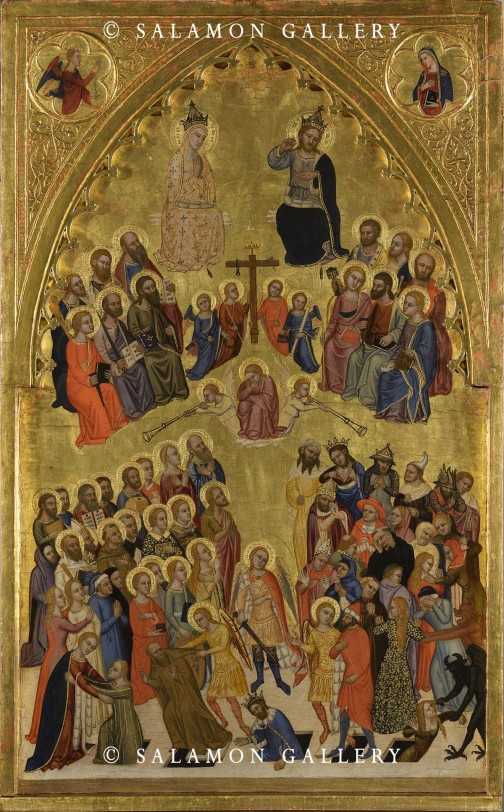 This painting, which is in absolutely superb condition, marks a major event because even though scholars have known of it for a long time, this is the first time that it has even been shown in public. The panel was meticulously restored by Loredana Gallo and a number of fascinating peculariaties emerged in the course of her work. The original support, with vertical grain, consists of three panels, the central panel being three times wider than the two side panels; but even more interestingly, the central panel is poplar wood whilst the two side panels are conifer. The upper side areas of the front of the painting bear clear traces of the small Corinthian capitals that formed part of the original frame and that were covered by new gilding when the frame was remade, most probably several centuries ago judging by the two figures comprising the Annunciation in sexalobate roundels at the two upper extremities. The announcing angel and the Virgin annunciate are very obviously by another hand in stylistic terms and of considerably poorer quality than the figures in the main scene, also on account of the punched decoration of the halos and the different pigments used. They are also of a later date than the main scene and can be tentatively dated, in my view, to some time between the turn of the 14th century and the first few years of the 15th. This later intervention, which "respected" the framing of the original, makes it impossible to discover whether there are any traces of side hinges in the (unquestionably plausible) eventuality that the panel may originally have been the centrepiece of a tabernacle with doors. Nevertheless, the suggestion[1] that the painting was originally the central part of a portable altar which included the Madonna and Child now in the Museu Nacional de Arte Antiga in Lisbon (inv. 1728) is not borne out by any evidence whatsoever. In fact, it is probably the result of a simple error in interpreting the list of works by Niccolò di Tommaso provided by Richard Offner[2]. The refitting of the frame also allows us to glimpse a change prompted either by conservation concerns or by changing tastes, which appears to suggest that the work was displayed for public devotion for a considerable length of time. The exquisite refinement of the brushwork and the precious nature of the materials used, the gold, the silver, the lapis lazuli, the vermilion and the lacquers with their translucent effect, together with the no less sumptuous handling of the gold ground, the punch marks, the abundant graining and the extremely dense rays emanating from the figures of the Virgin and Christ all point unmistakably to a commission of the greatest prestige.

The painting is listed with an attribution to “Orgagna sic. Orcagna” and an estimated value of 1,333 Tuscan lire in an inventory drafted on the death of Count Francesco de Larderel in 1858, when it hung in the Hall of Columns in the family's imposing palazzo in the heart of Livorno[3]. Roberto Longhi was the first to argue that the panel was probably by the hand of Niccolò di Tommaso in the course of a Sitzung at the Istituto Tedesco di Storia dell’Arte in Florence on 5 December 1931, highlighting its iconographical affinity with the Last Judgment in Bonamico Buffalmacco's frescoes in the Camposanto in Pisa, which were attributed to Vitale da Bologna at the time. Longhi's suggestion was accepted by Offner[4], who identified the panel as the picture attributed to Orcagna in the de Larderel collection. Yet it remained unpublished until it appeared in a book by Ursula Schlegel[5] who, from an iconographical viewpoint. underscored the artist's depiction of the Apocalypse combined with the vision of St. John on Patmos, just as Buffalmacco had done in the fresco in Pisa.

It is unquestionably one of the finest and most important panel paintings by this Florentine painter to have survived. His masterpiece in the field of fresco painting, on the other hand, is the vast cycle in the former church of the Tau in Pistoia[6], which he is likely to have completed by 1372. He may have been working in the city as early as in 1360[7] and on a more stable basis from at least 1370, in San Giovanni Fuorcivitas for a now lost panel painting (of which a panel depicting Saints in Adoration formerly in the Albrighi collection in Florence has been thought to have been a part[8], though it has also been more plausibly dated to the artist's final period[9]) and also for a number of frescoes in the celebrated Chapel of St. James in the Cathedral, to which certain fragments now in the Baldi Papini collection Quarrata belong[10]. On completing all these commissions, the artist was summoned to Naples by Fra' Giovanni Guidotti, who had previously commissioned from him both the frescoes in the church of the Tau and a triptych signed and dated 1371 for the church of Sant’Antonio Abate a Foria, now in the Pinacoteca di Capodimonte, which in all likelihood he had despatched from Florence.

Guidotti is almost certainly responsible for the artist's journey to Naples in 1373 where he painted various frescoes and panel paintings[11], a journey borne out also by the fact that the final payment for the panel in San Giovanni Fuorcivitas recorded for that year was made to a representative of his, a certain “Jachopo Ciani [sic]”, who it is tempting to identify as Jacopo di Cione[12], thus further confirming his fundamental relationship with the Orcagna family. This dazzlingly successful picture, however, is more likely to have been painted in the mid-1360s, with its clear and still vibrant echo of his formative years under the very strong influence of Nardo di Cione and its unashamed nod to the grandiose frescoes of the same subject in the Strozzi Chapel in Santa Maria Novella in Florence on which he is generally acknowledged to have worked as an assistant, even though it has recently and quite rightly been pointed out that identifying his share of the work with any certainty is a far from simple task[13].