Cupid with Fruit (Allegory of Autumn) 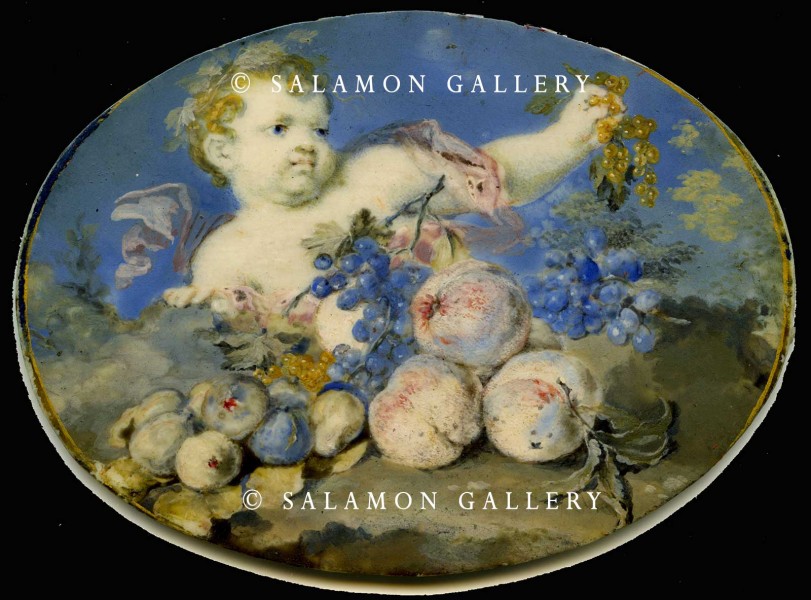 Emerging from a blanket of clouds, a putto stands out sharply against the clear sky. He grasps a bunch of golden grapes with his left hand while before him there sits an array of fruit consisting of peaches, figs, pears and yet more grapes.
The delicacy of the brushwork is consistent with the fact that this small oval tempera on ivory edged with gold highlights was designed as the lid of a snuff box, an item widely affected by the aristocracy throughout Europe in the first half of the 18th century. Snuff boxes made of noble materials and often decorated with superb miniatures came into fashion at the court of Versailles towards the end of King Louis XIV’s reign. The workshops of Paris manufactured boxes in gold, embossed silver and semi-precious stones, but also in ivory (or with ivory inlay) because ivory as a surface was easy to decorate in tempera or gouache. Snuff boxes occasionally served as sumptuous gifts of state, entrusted to visiting ambassadors and referred to in court jargon as “diplomatic snuff boxes”, while several artists specialised in painting them[1]: the most emblematic such artist was Carl Gustav Klingstedt (1657 – 1734) from Riga, who moved to France to take up service first with Duke Philip I of Orleans and then with King Louis XV’s prime minister, Cardinal Guillaume Dubois[2]. The predilection for painting miniatures on ivory shown by Klingstedt – whom his friend Voltaire rechristened ‘Clinchetet’ – led to his being known at the court of Versailles as ‘Le Raphael des Tabatiers’, a definition which also speaks volumes regarding the popularity of such items. Many important painters of the period dabbled sporadically in the production of miniatures “for snuff boxes”, and their number included the Venetian painter Rosalba Carriera at various different moments of her shining career[3].
The charming oval under discussion here, from a private collection in Germany[4], was first attributed to Rosalba Carriera when it was auctioned in the 1970s, an attribution reiterated more recently and enthusiastically confirmed by Fabrizio Magani (vocal communication). Displaying her customary dexterity as a painter, Rosalba here offers us an example of her skilful handling of colour while at the same time making the best use of her support’s lighter shade to impart greater luminosity to her subject. The presence of four bunches of grapes in the array of fruit in the foreground suggests that in this case the putto is likely to be an Allegory of Autumn and that the oval was originally one of a set of four bearing depictions of the seasons. What is certain, at any rate, is that Rosalba’s talent for decoration was bolstered by her interaction with her French counterparts – not simply with Watteau, Lancret and other masters in the art of “pittura di tocco” as one might expect, but also with such still-life painters as, primarily, Alexandre-François Desportes and, again, Watteau whose style appears to be echoed in the peaches and figs in the foreground.
Rosalba Carriera, born to a clerk of middling rank in the service of the Procuratore di San Marco, had the good fortune to be raised in a highly stimulating environment[5] where she learnt French (as we can tell from the elegant letters she wrote to her correspondents in Paris), history and ancient and modern literature. She turned to painting while still a girl, showing a decided preference for miniatures in her teenage years which she naturally continued to pursue in her maturity[6]. She became a member of Rome’s Accademia di San Luca in 1705 at the age of 30, the favourable opinion of her voiced by Carlo Maratta, the “Prince” of the Academy, being based on the despatch from Venice of a splendid Girl with a Dove which Rosalba had painted on a small ivory oval and which may still be admired in the seat of the Academy to this day[7]. Though she cannot be considered to be the first painter ever to have turned to ivory for her tempera or gouache compositions, Rosalba was unquestionably the artist who imparted to such compositions the formal perfection that was to make them so popular with patrons. Much written evidence of her miniature “portraits” on ivory has survived, while the exemplars that have come down to us suggest a preference on her part for rather small supports ranging from 5 to 10 cm., as in the work under discussion here.
Rosalba’s Diaries reveal that she continued to work on miniatures with constant success until 1726-7 and sporadically in even later years[8], thus the previously held view that all her miniatures were youthful works may confidently be dismissed. The echo in our Cupidof the French masters mentioned above and the mature pittura di tocco with a distinctly rocaille feel that it displays liken the work to numerous other compositions similar to it in both format and technique, and all attributable to the years immediately after Rosalba’s time in France (1720-1). Particularly striking are its similarities with two miniatures – the first depicting Venus and Cupid, the second a Female Figure with a Goldfinch and Cherries – in the collection of the Dukes of Devonshire at Chatsworth[9], and with a third – yet another Venus and Cupid – formerly in Ernst Holzscheiter’s collection in London[10]. As Bernardina Sani has pointed out, these works show considerable independence from Watteau’s style, which Rosalba is likely to have studied in the course of her many visits to her friend and collector Pierre Crozat’s home. In 1716 Crozat had commissioned Watteau to paint a set depicting the Four Seasons on oval canvases which were to become extremely well-known through the engravings that were made of them. The still-life mood captured by Rosalba in the painting under discussion here appears, in particular, to take its cue from the work of Watteau – witness, for example, its formal similarity in a number of areas with the array of fruit to be seen in his Allegory of Autumn now in the Musée du Louvre.