The Coronation of the Virgin, with Saint Nicholas of Bari, Anthony Abbot, John the Baptist, Francis of Assisi, Philip and Zanobi 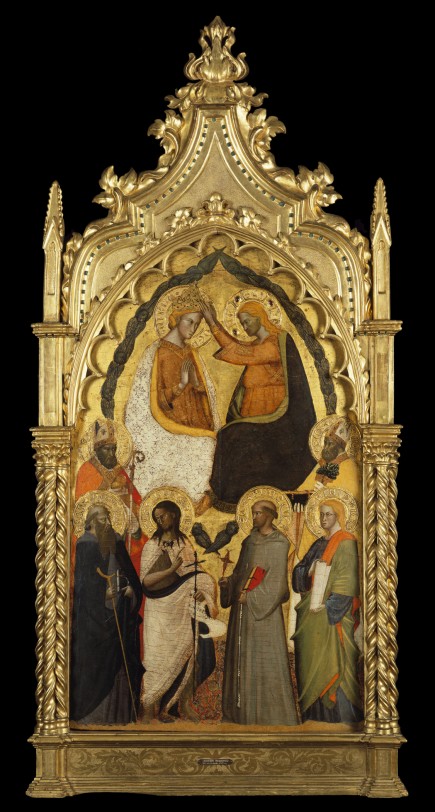 The Virgin holds her hands in prayer and lowers her gaze with respect while Christ places an ample gilded and embellished crown on her head as Queen of Heaven. Depicted with fine features and a pale skin, Mary is wearing an ample white cloak and an ochre underdress. Christ is represented as a young Man with long hair falling down to His back. He is dressed in an extensive black coat and He has a large tree-radiant halo around His head as to echo the doctrine of the Trinity. All around them, Cherubim are forming a garland, holding their wings upright. In the lower part of the panel, Saint Nicolas of Bari is represented wearing his Bishop’s vestments and carrying three dowries. Saint Anthony Abbot is shown with his monastic habit, holding a tau cross in his hand. Saint John the Baptist wears his customary camel vest and grasps a staff terminated by a cross and a banner with the words “Ecco Agnus Dei” while pointing at God the Father. Saint Francis of Assisi is portrayed with his tonsure, wearing his Franciscan habit and carrying a red book under his arm. Saint Philip is shown holding the Gospel while Saint Zanobi, the bishop of Florence, grasps a flowering tree and a black book in his hands. Each saint has a broad halo surrounding their head, punched with a raised relief.
Published as a work by the so-called ‘Maestro Francesco’ by Federico Zeri in 1968 and by Miklòs Boskovits in 19751 this panel has arrived to today in an optimal state of conservation, with the exception of the addition of eight centimetres visible at the top part of the work. It is Eve Borsook2 who in 1968, concentrated on the mysterious master who signed ‘Francesco’ and dated a panel with the Madonna and Child with Saint John the Baptist and Nicolas of Bari (1391) previously in the Chiesa di Santa Maria a Quarto and now in the Galleria dell’Accademia. Borsook linked the works of the ‘Maestro Francesco’ to the oeuvre previously assembled by Richard Offner under the reference name of ‘Master of the Raised Halo’. Later, Federico Zeri independently added a total of twelve pictures to the corpus of the ‘Maestro Francesco’ including some of the works considered byOffner as by the 'Maestro del Cristo Docente'3. Boskovits added a further twelve panels, including this example to the group4.
The oeuvre of the Maestro Francesco is well defined and mostly consists of works representing the Madonna and Child or the Coronation of the Virgin surrounded by Saints, as in the present picture. In terms of composition and style, comparisons may be drawn with another Coronation of the Virgin (1380s) by the Maestro Francesco in the Musée du Petit Palais in France. Previously attributed to Mariotto di Nardo, this work displays a similar well-balanced design with a particular inner tension and a skilful use of space and perspective. Also typical of the Maestro Francesco is the precise and elegant figural outline with expressive traits, seen in the depictions of the saints in the Madonna and Child in Glory (around 1400) in the Ospedale degli Innocenti in Florence. The early pictures of the artist, created in the 1380s, are based on formulas indebted to Agnolo Gaddo’s technique. Later works, including the aforementioned Madonna and Child with Saint John the Baptist and Nicolas of Bari (1391) previously in the Chiesa di Santa Maria a Quarto and a Crucifixion in the Museum of Copenhagen (1390s) testify for the artist’s adherence to the style of the Maestro di San Martino a Mensola. The accurately rounded forms, the delicate chiaroscuro and the touches of light accentuating the reliefs remind the technique used by the Maestro di San Martino a Mensola in a Coronation of the Virgin (1385 – 1390) in the Musée des Arts Décoratifs in Paris.
A date of around the 1390s, about the same time as the Madonna and Child with Saint John the Baptist and Nicolas of Bari (1391) previously in the Chiesa di Santa Maria a Quarto, is considered acceptable for this work. It is in that period that, according to Boskovits5, the artist created his most qualitative output. The present work was part of the illustrious collection of Walter P. Chrysler, alongside masterpieces ranging from Veronese’s Virgin and Child with Angels Appearing to Saints Anthony Abbot and Paul the Hermit (1562) to modern works such as Matisse’s Bowl of Apples on a Table (1916). In 1971, Chrysler donated a large part of his collection to the Norfolk Museum of Arts and Science which was soon to become the Chrysler Museum of Art; his gift is still now considered as one of the strongest and most various ever given by a single individual to an American museum. This work, however, was not given as part of the bequest. It stayed in Chrysler’s private collection until 1981, but was given on loan to the museum from 1978 to 1980.