The Rialto Bridge from the South 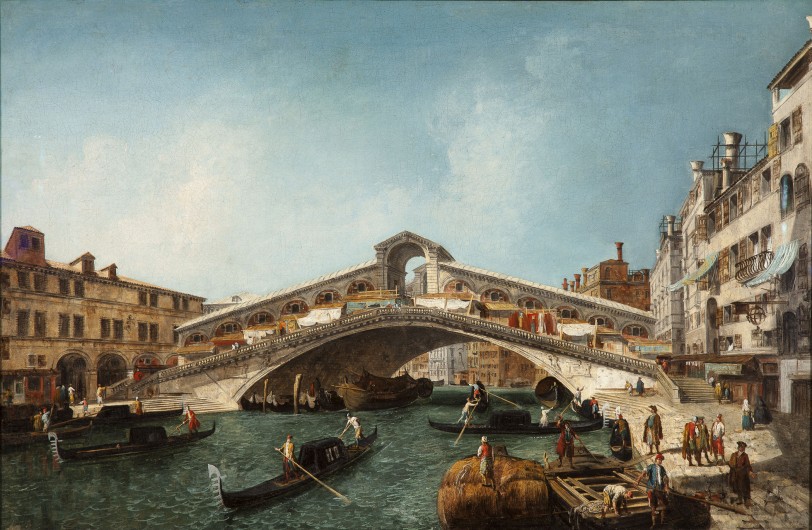 All the vibrancy characteristic of Marieschi’s best work was obscured by discoloured varnish when this painting was sold in 1991 as the work of his pupil Francesco Albotto. Curiously, Marieschi’s authorship seems to have been doubted because of the close relationship between the composition and that of a painting in the Bristol Museum and Art Gallery which, inscribed with the initials MM on a barrel, has long been taken to be one of the artist’s only signed works. While the architecture corresponds in its broad outlines, there are numerous subtle differences, and the similarities between the boats and figures do not extend beyond their approximate positions. A variant, taken from a viewpoint on the Riva del Ferro to the right, is in the Philadelphia Museum of Art. A fourth version was sold from the Fermor-Hesketh Collection at Christie’s, London, in 1988. Sold (with a pendant) as the work of Marieschi, both were published immediately afterwards by Dario Succi as the work of Albotto. He, however, subsequently changed his mind and the attribution to Marieschi has since been generally accepted. All other versions seem at best to be the work of Francesco Albotto. Publishing this painting in 1992, Succi suggested a dating between 1738 and 1740, between the variants in Philadelphia and Bristol. Ralph Toledano agrees, describing the painting as a ‘Brillante versione’ of the subject. Pedrocco, describing this painting as ‘di notevole interesse’, suggests a slightly earlier dating, close to The Rialto Bridge from the North with the Arrival of the Patriarch Francesco Antonio Correr, 7 February 1735, documented to 1737, now at Osterley House (National Trust). While Succi considers the figures the work of Marieschi himself, Pedrocco suggests that, as in the Osterley painting, the figures may be the work of Gaspare Diziani (1689-1767).