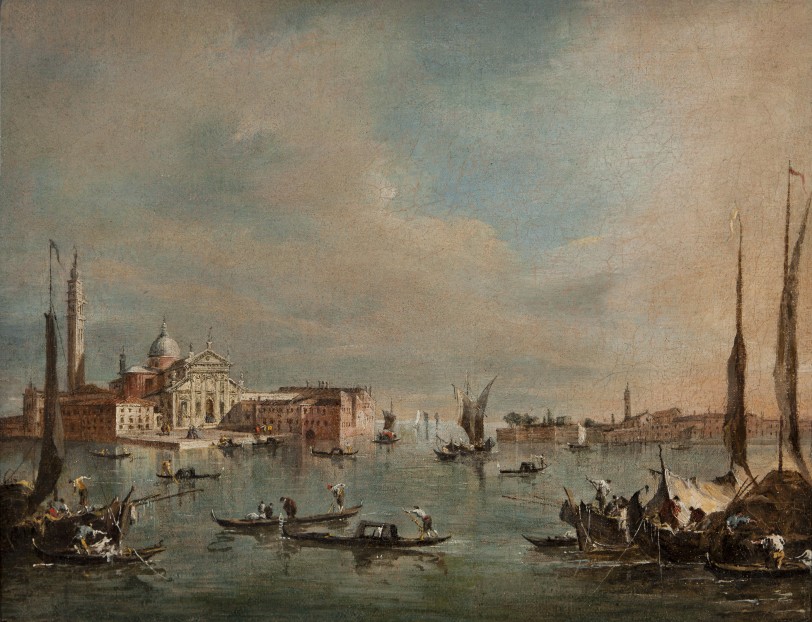 In a twilight landscape, groups of boatmen and gondoliers are rowing their boats towards the quay of the square. The shape of the church and convent of San Giorgio Maggiore stands out against the blue sky, shadowed by reddish clouds, while on the right there is the eastern part of the Giudecca with the Church of Santa Maria della Presentazione and the garden of the “Zitelle”. The canvas is part of a group of very similar compositions, made by Francesco Guardi in his mature phase, from around 1770. As known, the artist approached the landscape painting only after turning forty. Until then, Guardi was mainly dedicated to figure painting, in the shadow of the successes of his elder brother Giannantonio. Only at the end of the 1760s Francesco approached the landscape painting, maintaining nonetheless the elegiac and humoral nature that had marked his earlier style. If in a 1750 document Giannantonio was indicated as pupil of Sebastiano Ricci and instead a decade later Francesco was noted as follower of Canaletto, we can say that the views of the younger brother are part of the rococo poetics that found its beginnings precisely in the works of Sebastiano and Marco Ricci, of course considered and appreciated through Giannantonio. The passing of Canaletto in 1768 is a decisive event in the career of Francesco Guardi. Until that moment, he could have counted on a small number of specialized clients: educated gentlemen, fond of Goldoni’s theatre, who avoided the neat and excessively systematic vision of the major landscape painters, hence preferring those of our artist, which featured smaller dimensions and a quite more vibrant light. With Canaletto’s death and Bellotto’s continuous wandering in the central northern European courts – on the same year of the death of his famous uncle he left Dresden and moved to Warsaw – Francesco remained the most appreciated landscape painter in Venice. His most complex paintings were made during the following decade, and his production of views built following the same point of view increases in number. In this phase it seems like if Francesco becomes suddenly aware of his skills as narrator of a civilisation and its long sunset. The twilight settings, far from resulting only an expedient for the lighting, are actually a key to understand the poetics of this poet, in his emotional digressions not far from the contemplation of the remains of the past made by Piranesi in Rome during the same years. And it is natural that Guardi, taking into consideration the greatness of the history of Venice, looks for basis for comparison precisely in those artists who had established in centuries the luminous and delightfully charming aspect of the Serenissima. And the closest comparison is clearly the one with Andrea Palladio. In our view the great protagonist is Palladio. Guardi meaningfully choses the less famous bank of San Marco: the limit of the last of the Giudecca island and the area of San Giorgio. And it is precisely on the bank of the Giudecca that Palladio had left his greatest mark in the city during his last twenty years of life. Between 1560 and 1577 the architect from Vicenza, mainly known until then for the suburban villas and the civil buildings, had designed the refectory of the monastery and the great basilica of San Giorgio Maggiore, and a few years later the basilica of the Santissimo Redentore. The Church of Saint Mary of the Presentation, also known as of the “Zitelle”, whose attribution is uncertain yet it was built in the same years, had been connected to these two great monuments. The diagonal view of the façades of the churches, with the resulting standing out of their profiles on the background, more distant than they actually are, transforms this image in a powerful reflection on time: on the foreground is the contemporaneity, played by the activities of the sailors; behind, Venice, eternal and unchanging in the magnificence of its history. Our canvas had been compared several times with the one, similar also in its dimensions, conserved today in the Wallace Collection in London.