Master of the Straus Madonna 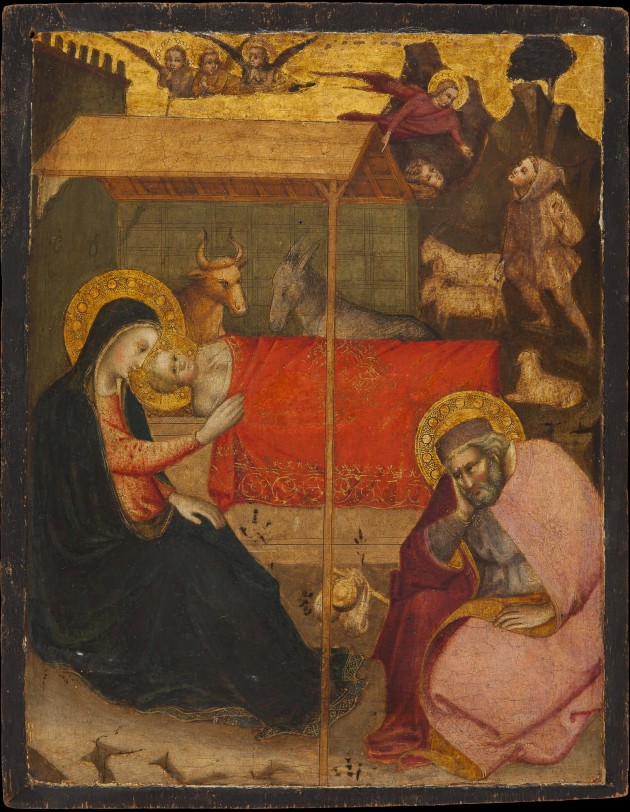 In an open cabin, quite similar to a city loggia, the seated Virgin, seated, is covering with a red sheet, which is gold-decorated on the rims, the Child, lying on a bed; slightly behind, the ox and the donkey are part of the domestic scene, while on the right Joseph, his head leaning on the hand, is thinking about the miracle of the incarnation. In the meantime, an angel is pointing the cabin to a shepherd and his flock, while above three angels appear to be distracted from their prayer exactly by the performance of the announcement. The painting, among the most famous and studied of the Florentine painting at the end of the fourteenth century, is a work of the so-called Mater of the Straus Madonna, an artist whose name is still not know (although Sonia Chiodo proposed to recognise his identity in those of the painter Ambrogio di Baldese ), and nevertheless key figure to understand the passage from the late Giottism to the International Gothic in Florence. Identified in 1928 by Longhi as the author of the Madonna with the Child, formerly belonging to the Edith Abraham and Percy Selden Straus Collection in New York (today at the Houston Museum of Fine Arts), to whom the critic associated a quite large stylistic group , since the very beginning the Master of the Straus Madonna is considered, as Gherardo Starnina, Lorenzo Monaco and Masonilo da Panicale, one of the most important figures of the late Gothic painting in Tuscany. Thanks especially to the researching of Miklós Boskovits and more recently of Angelo Tartuferi , his catalogue counts today around fifty paintings, made in an around thirty-year long activity: from the 1380s, characterized in Florence by the figurative experience of Agnolo Gaddi, until the 1420s. Our painting can rely on first-class reports concerning its attribution, offered by the greatest art historians of the twentieth century, and on a remarkable collecting sequence of events: already connected to Agnolo Gaddi when it was in the Palazzo dei conti de Larederel in Livorno, it was included by Offner in the group of 28 paintings which he attributes to the Straus master. Then, in 1946, Longhi (written communication) pronounces in favour of the master’s autography, when the painting belonged to an important Roman collection. And it was maybe thanks to Longhi’s advice that the painting – along with an Adoration of the Magi, subsequently in the Samuel H. Kress collection and today in Seattle’s Art Museum, clearly made for the same reredos – joined for some time the Alessandro Contini Bonaccossi collection. When it subsequently passed to the Milanese industrial Michele Bagnarelli, the painting was published again in an important contribution of Luciano Bellosi and naturally included in the group of works of the Master of the Straus Madonna in the volume of Boskovits on the Florentine painters at the end of the fourteenth century. Critics agree on considering the painting, as the above-mentioned Adoration of the Magi, formerly Kress, a work of the master’s first phase of activity, made around 1390. A clear evidence is the usage of the line – noticeable in the draperies – which is delicate yet still far from any formal abstraction. The figures, located forward with a precise prospective knowledge and an incisive usage of the graphic sign, bring, in this phase, the Straus master close to Spinello Aretino, active in Florence since almost a decade and dedicated since the beginning of the 1390s to the decoration of the Bartolini Salimbeni Chapel in the church of Santa Trinita. The chromatic preciousities and the dexterity in using the punching on gold certify the modernity of this charming crèche. Therefore the coexistence of ancient and modern elements makes our painting not only one of the best results of the career of a protagonist of Italian art, but also an extremely important work of the changing of the formal reason which took place in the Florentine painting at the end of the fourteenth century.