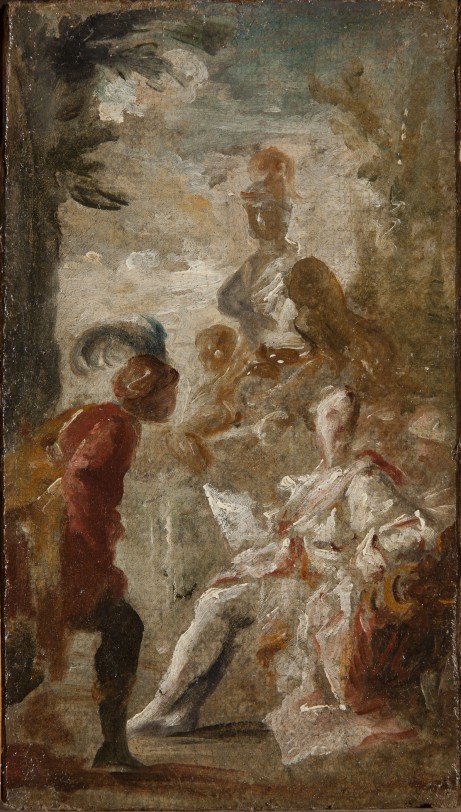 Two knights, the first riding a horse and wearing a bright armour, the second with a red gentlemen cloak, are arriving in a flourishing garden. Waiting for them is a seated woman, wrapped in a sumptuous dress with an eighteenth century hairstyle; behind her the head, covered by a helmet, of another warrior can be seen, clearly the gentlewoman’s prisoner for love. The subject of this beautiful sketch can be identified as one of the most famous episodes of the Jerusalem Delivered of Torquato Tasso: the passage of the XVI canto in which the paladins Carlo and Ubaldo, sent by Godfrey, enter Armida’s palace to make Rinaldo reason, separate him from the maiden and bring him back to the war of the crusaders. Armida was a Muslim sorceress, niece of the lord of Damascus. She captured in battle the Christian knight Rinaldo and fell in love with him to such an extent that she used magic filters on him, tying him to her with flower chains. By reason of Carlo and Ubaldo’s intervention Rinaldo left his beloved and went back to fight at the siege of Jerusalem. The author of the sketch can be identified as the Venetian painter Giovanni Antonio Pellegrini. The artist, born from a Paduan family – yet in Venice and not in Padua, as Antonio Maria Zanetti and Antonio Guarienti claimed – was of the Venetian masters the freest and least bond to the culture of that area. This feature of his is undoubtedly due to his particular apprenticeship: he crossed the Alps when he was only fifteen years old, following the master Paolo Pagani. The Vienna and Moravia experience, following an important Roman stay at a more adult age and then frequent journeys serving the greatest European courts, marked the background of a specifically late Baroque painter, aware of the international language formed at the end of the seventeenth century . In his early phase he was mainly influenced by two masters: of course Giordano – the most successful painter of Venetian figurative experiences in the mid-seventeenth century – studied on the canvases of Santa Maria della Salute and later on the paintings sent to the court of France; and then Baciccio, carefully observed on the frescoes of the Church of the Gesù in Rome. The painting fluency of these masters, capable of conveying a nervous and vibrant emotion to their works, is what impressed Pellegrini’s character. This is why, despite approaching the easier and clearer style of Sebastiano Ricci since his moving in England in 1708, Pellegrini never abandoned the energy of the dark colours, used and balanced to give sturdiness to the figures and pathos to the stories. It is no coincidence that the sketches – just as in Sebastiano Ricci’s work – show more than the paintings themselves the formal conception followed by the author. In fact sometimes the light contrasts can’t be found in the paintings, which feature less strong chiaroscuros. On the contrary, the sketches maintain all the freshness of the invention and of the creative liberty of an artist with a lively intelligence. As Ricci said in the famous letter to his friend the count Giacomo Tassis “this small one is the original and the altar piece is the copy” : an extraordinary declaration of a new aesthetic sensibility which became a common code among the artists during the beginning of the eighteenth century and which Pellegrini is fully aware and part of. Our sketch is datable to the first years of the new century, in the proximity of the painting of the ceilings of Palazzo Albrizzi in Venice and of the numerous canvases featuring the Stories of Alexander the Great, scattered in several collections in Europe and in the United States. A rather relevant comparison can be made with the preparatory sketch of the Meeting between Alexander and Paro (the canvas is conserved in Padua in the Collection of the Cassa di Risparmio di Padova e Rovigo; the sketch in the Pinacoteca Comunale of Ravenna ). Besides the affinity in the description of the environment – a sky with vaporous clouds on which the profile of the trees stands out to close the composition on the sides – the facial expressions of the figures attest the contemporary of these works. The disarticulation of the shape to which Pellegrini will get in the sketches of his mature activity, whose style appears close to the works of Giuseppe Maria Crespi e Giovan Battista Piazzetta, hasn’t been achieved yet; we are still in a previous phase, characterized by the proximity to Ricci and more in general by his adhesion to the formal themes of the “chiaristi” painters of the beginning of the eighteenth century.