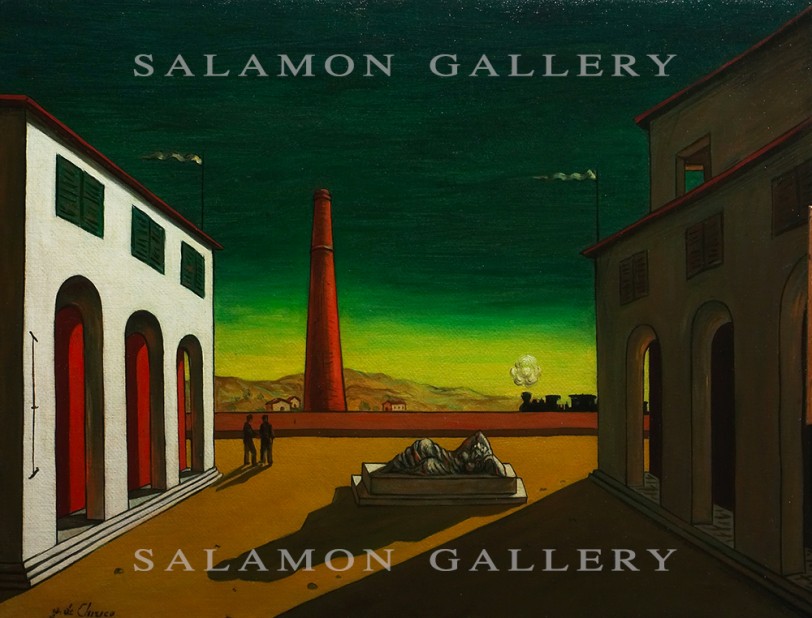 This Piazza d’Italia, formerly in the Mercurio Collection in Milan[1], painted by Giorgio De Chirico in 1952, displays all the elements favoured by the artist’s metaphysical poetics, chiefly a square with architectural structures and porticoes, the statue portraying the sleeping Ariadne, the presence of two men conversing in a corner, a smokestack and a train.   Over the years, the artist would employ and return to these themes, sometimes after long spells of time, shaping an outright method and especially allowing the infinite combinations it could achieve to surprise him. In his 1929 Hebdomeros, De Chirico would in fact write “When you have found a sign, turn it back and forth, look at it from the front and the side, by three quarters and as a foreshortening; remove it and observe what shape is created by the memory of its appearance.”[2]

De Chirico’s compositions are dominated by the recollection of a place or a moment and are suspended between dream and reality. The theme of the Piazza d’Italia, executed after the artist’s 1912 stay in Turin, underlines this sensation, as is blatant in the present version, thanks to an aura of mystery and anticipation that dominates the entire space, giving it a prevailing feature of solemn silence, further emphasized by the long shades projected by the architecture, the statue and the two men.

Regarding his Piazza d’Italia subjects, thus the memory as a fundamental aspect maintained in essence, De Chirico would write in 1925: “I still had the Piedmontese capital clear in my mind; the monarchic city with its squares inhabited by scientists and the King, by politicians and warriors, standing still in their jaded, solemn poses on their stone plinths. I was still thinking about the bizarre lyricism of its fatal geometric construction.”[3]

It is clear that, after many years, the artist stripped every element from its reality, reaching a highly refined and elegant chromatic and formal balance, a lyricism that secures everything in a ghostly, timeless space, where the symbolic and sign values of anything that makes up the work are emphasized; this mature masterpiece is not exempt from this.  What’s more, although his 1910 L'énigme d'un après-midi d'automne tells the origin of another masterpiece of his, it may also somehow represent the basis of the subsequent Piazza d’Italia subject, revealing that the predominant aspect of the memory of a place is pivotal for De Chirico and it is the impulse that allows him to fashion his works: “In the middle of the square stands a statue representing Dante, wearing a long cloak that adheres to his body and he tilts his pensive, laurel-crowned head downwards. Executed in white marble, over time the elements gave it a grey film that is pleasing to see. The tepid, loveless autumn sun brightened the statue and the temple façade. I then had the strange feeling of seeing everything for the first time. I thought about the composition of my painting; each time I see it, I picture this moment again. And yet the moment is an enigma to me because it cannot be explained. I like to define the work that ensues as an enigma, too.”[4]

The arched architectural structure, which can be traced in the 1911 Enigma dell’ora for the first time, and that confines and defines the two sides of the square, represents the metaphor of the eternal present for De Chirico, being an element that combines abstraction and substance, solid and void, the exchange of internal and external, a projection of light and shade. And that’s not all, since the artist believes that architecture is a sort of “mysterious game, whose windows and doors are akin to eyes and mouths. The building thus becomes the first term, the first sculptural metaphor, and suggests that everything holds a skeleton, a secret architecture that makes up its life and soul and that can be discovered freeing the shapes from naturalism and from what is transient.”[5]

Between the two architectures, the statue of the sleeping Ariadne stands out silent and solitary. As has been mentioned: “the Ariadnes from the neo-metaphysical period”, such as the one in the present painting, “further vary the canon: the statue certainly does not lose its symbolic value, but the brush sketches out the features and the limbs faster. The interest does not lie in emphasising the pictorial details, but rather the ‘form’”.[6]   A female “shape” that is juxtaposed to the phallic male element of the smokestack standing in the background, beyond the wall, which is another symbol favoured by De Chirico, who usually employs it with a specific meaning.  Life beyond the wall is, in fact, where the mysteries going on in the afterlife occur, the place of enigmas, of journeys and risky adventures of the mind”, where one can find sunny, barren mountains, the train as a synonym of a voyage and a group of houses dotted around the smokestack. “This side of it, instead, within the riddle of shades and in the senseless game of life, the turmoil of men paying attention to harbinger voices comes about, themselves curious of the mystery that stays beyond the boundaries of the visible universe, marked by the wall.”[7]  In this extraordinary Piazza d’Italia, among the last masterpieces carried out by De Chirico, everything is suspended and enveloped in the mystery of the enigma, in a metaphysical sense of time and things.