Capriccio with Ruins and Figures 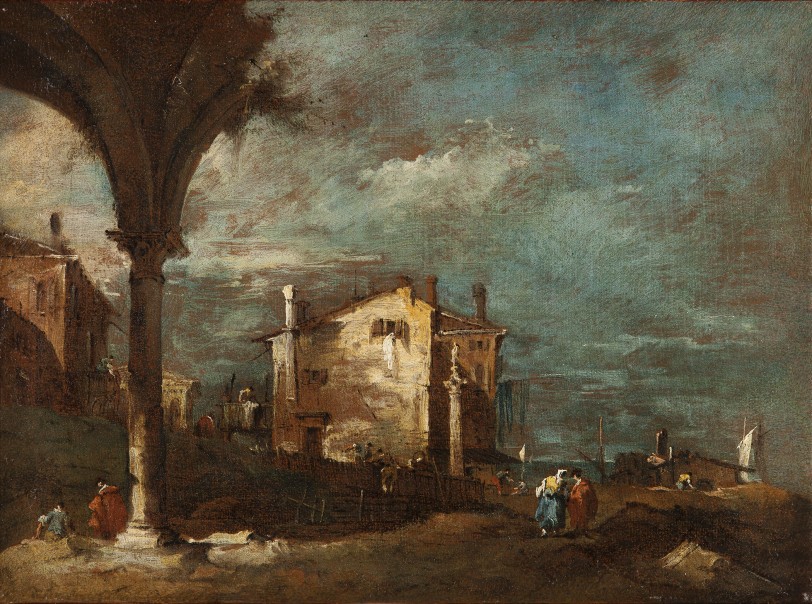 In a twilit landscape, brightened by a glow coming from the left, a few figures animate an intimate and folksy scene. The rustic houses, which are defined with the precision of the live portrait, overlook the mainland shore of the lagoon of Venice. The ruined portico on the foreground and the column on the centre, upon which the statue of a classical deity is visible, ennoble the composition while adding the keen capriccio nature without however reducing the truth of the snap shot.

The painting was presented in 1963 during a sale at the Relarte Gallery in Milan[i] and later published by Morassi in the monograph dedicated to Francesco Guardi[ii]. It is a variation – whose dimensions are, besides, very similar, although our painting appears to be more absorbed and less dilated on the horizontal axis – of the one conserved at the Castelvecchio Museum in Verona (inv. 1749 – 1B0223)[iii]. The origin of this composition resides in a drawing by Guardi (Florence, Horne Museum, Inv. 5663)[iv], which in turn partly derives from Canaletto’s famous etching The Portico with the Lantern[v]. Rather than being based on the model of Canaletto, it is a genuine lyrical revision of the forms. In Canaletto’s etching, the portico isn’t ruined and the square in front of it is enclosed by solemn buildings built in a classical style: rather than deriving from the ensemble of monuments and minors, the nature of the capriccio resides in an intense contrast between the solemnity of the triumphal arch and the noble palace on the right, and the bare landscape of the most desolated part of the lagoon. Instead, in Guardi’s composition – both in the drawing of the Horne Museum and in the three paintings on canvas, the one of the Castelvecchio Museum, ours and a third one (featuring little differences) today in storage at the Fritz-Behrens-Stiftung at the Niedersächsisches Landesmuseum of Hannover – the melodic intonation of the environment is preponderant. The melancholic splendour of the ruined remains, as it often happens in Giovan Battista Piranesi’s etchings, is perfectly coherent with the construction of the scene of our twilit poem. The rustic houses, the slopes of the shore, the figures variously dressed and organized in couples, almost as if they were concentrating on dance steps, aren’t in contrast with the ruined portico or with the triumphant column in front of the main house; on the contrary, we could say that the figures, the buildings and the environment are part of the same poetics, elements of the same vivid and saturnine imagination.

In the activity of Guardi as a landscape and capricci painter the inclination to combine the models of the first half of the 18th century Venetian art with original intuitions, elaborated according to the prevalent trend of his time, is constant[vi]. If on the one hand Guardi quotes compositions by Carlevarijs, Marco Ricci and especially Canaletto, on the other he considers himself as an immediate reference, aware of the fact that he belongs to the highest degree of a tradition that is glorious yet already declining. Hence the reason for the artist’s reiteration over the time of the same paintings, even if in different phases of his career, and this is why it is sometime difficult to date the various redactions. Morassi considers the drawing of the Horne museum as a late artwork due to the liberty of the inspiration and the substantial autonomy from the model[vii]. Yet the painting of Verona, inspired by the drawing and our canvas’ closest source, has been variously situated: Morassi states it has to be dated to the 1760s[viii]; Succi, who in 1988 had challenged the autography of the canvas believing it to be a workshop copy with variations of the painting today in Hannover[ix], has later corrected himself by confirming Guardi’s authorship for both Hannover’s and Verona’s paintings, situating the latter around 1770[x]; finally, more recently Merling shifts the dating to the following decade, at the end of the 1780s[xi].

If for the canvas of Castelvecchio, as for the one of the Fritz-Behrens-Stiftung, the chronological reference suggested by Succi, around 1770, seems to be pertinent, our variation can be ascribed to a following phase: in the above-mentioned canvases the sunset is described with brighter tones and lighter nuances, with less heavy shadows. On the contrary, in our canvas the light isn’t distributed but darts, and the prevailing tonality of the sky is nor white or pink, but blue. It is clear that our painting is closer to the dates of the Architectural capriccio of the Poldi Pezzoli Museum of Milan[xii], dated variably to between 1775 and 1785, a phase in which Guardi seems to be more and more distant from his models, willing to elaborate a personal poetics by using a vivid and changing light. Compared with the two important precedents, our painting clearly proves the evolution of the style of one of the main protagonists of the European painting of the late 18th century.