Madonna and Child enthroned, with Saint Peter, Saint Paul and Saint Andrew, the Crucifixion and the Symbols of the Congregation of Monteoliveto Maggiore 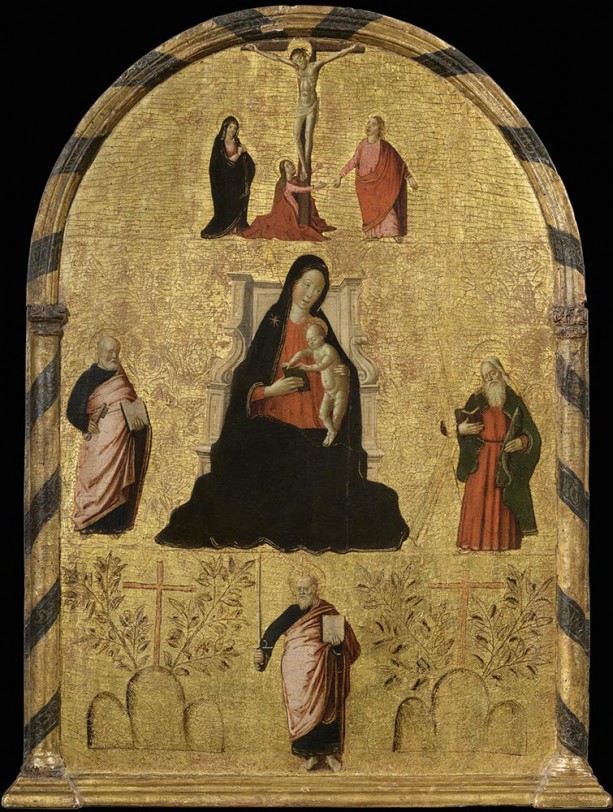 The panel shows several different figures disposed in three registers on a single plan, distinguished by the differing treatment of the gold ground. Three Saints and the scene of the Crucifixion are placed around the enthroned Madonna and Child, forming a visual cross with the larger Marian image in the centre. The Young Christ is shown standing upright on his Mother’s knee while reading from a book that she holds. Saint Peter grasps a key symbolising his role as keeper of the gates of heaven, Saint Paul is distinguishable for he holds a sword as a reminder of his martyrdom of beheading and Saint Andrew is portrayed with a large fish, alluding to his life as a fisherman, before being called as Christ’s disciple (Matthew 4:18). All three apostles are depicted carrying a book and while Saint Peter and Saint Paul hold it open towards the observer, Saint Andrew seems intent on reading. At the top of the panel is the crucifixion of Christ with the mourning Virgin and Saint John the Evangelist as Saint Mary Magdalene cries at His feet. Either side of Saint Paul are the symbols of the congregation of Monteoliveto, the branch of the Benedictine Order that was founded by the Blessed Bernardo Tolomei with an emblem made of three hillocks surmounted by olive branches - reminding the Mount of Olives - and a cross.

Luciano Bellosi[1]was the first to propose adding “this small altarpiece of most beautiful quality”[2]to the catalogue of Pietro Buono, a complex artistic personality active in Naples and celebrated, amongst others, for his participation in the decoration of Castelcapuano commissioned by Alfonso d’Aragona, Duke of Calabria. The attribution was later accepted by Everett Fahy[3]as well as by Fiorella Sricchia Santoro[4], Andrea Zezza[5]and Mauro Minardi[6]. Comparisons with other works of Pietro Buono further corroborate the artist’s hand; the altarpiece of the Deposition of Christ (1473 - 1475) at the Chiesa di Santa Croce in Naples or the triptych with the Coronation of the Virgin and the Apostles Peter and Paul in the Lindenau-Museum in Altenburg (1488) both sharing many resemblances with the present work. The representations of Saints Peter and Paul in the Lindenau picture correspond those here; the drapery of the garments and the depiction of the attributes are much alike whereas the expressions and figures are matching in style and construction and share the same solemn vertical placement. Bellosi writes, “we find in this anconettaa marvellous skill at constructing figures in the round and at ‘seeing them’ in space”[7]. A particular skill also to be found in the panel with Saint James and Saint Andrew in adoration of the Virgin and Child (1500) in the Museo di Capodimonte in Naples, which displays a similar well-balanced design.

Pietro Buono shows a decided predilection for the Flemish paintings present in Naples and his works prove to pertain to a visual culture formed by the example of Niccolò Antonio, called Colantonio. The physiognomy of the figures, with their small heads on a robust body and the emphasis on the sculptural treatment of the draperyall remind Colantonio’s style, himself influenced by artists such as Jan Van Eyck. Links can be made with the series of Saints now in the Fondazione Giorgio Cine previously part of the polyptych (1444 - 1445) created by the artist for the Chiesa di San Lorenzo Maggiore in Naples. Pietro’s hand also reveals some affinities with that of Riccardo Quartararo - active in Sicily and Naples - for he seems to adapt a similar tendency towards ample and monumental forms, such as in Quartararo’s Saints Peter and Paul(1494) in the Galleria Regionale della Sicilia in Palermo.

The present panel has the characteristics of a small altarpiece. Judging from its size, it might have been intended for the private devotion of a cultivated member of the Olivetan or for a small altar in a church or monastic room belonging to the Olivetans. As both Bellosi and Minardi suggest, this work should be dated during or after the turn of the century, at about the same time as the aforementioned Saint James and Saint Andrew in adoration of the Virgin and Child (1500) in the Museo di Capodimonte in Naples for itshows a sense of space and a treatment of perspective more developed than in the aforementioned altarpiece of the Chiesa di Santa Croce (1475).

[3]Everett Fahy attributed this panel to Pietro Buono after first hand inspection in 2010.