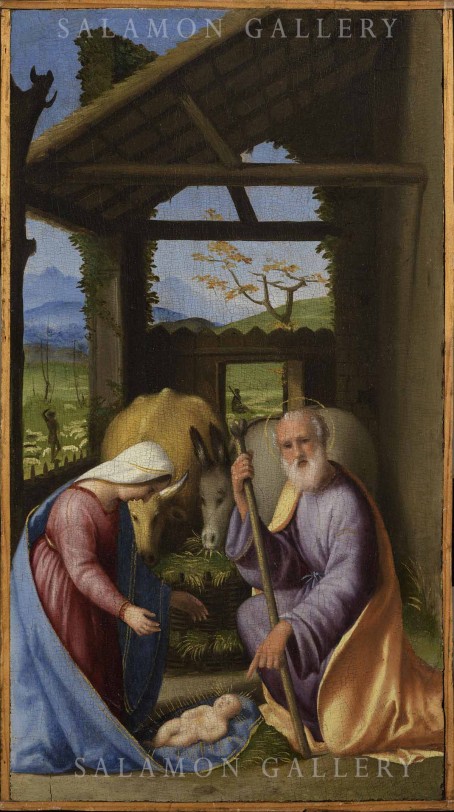 The present painting is in an outstanding state of conservation. A support knot can be seen on the top right-hand corner, next to the front hut beam. This may well be the Nativity painting, mentioned but not published by Heinemann (1962, p. 148, no. S393); at any rate, J. Meyer zur Capellen (1972) notified it as a work by Andrea Previtali, an opinion later shared by M. Lucco (1994). Chiappini (1975), however, did not take it into account. The style of the present work, in fact, recalls other paintings by Previtali, executed in the third decade of the Cinquecento, and is strongly linked to Saint Jerome and the Martyrdom of Saint Stephen in the Background at the Accademia Carrara in Bergamo, where one can equally identify a proscenium darkened by the backlight, whose dusky bulk is counterbalanced by a bright landscape in the distance. Such a dramatic narrative method is typical of Previtali and can be seen in the Saint Jerome, formerly in the Serristori Collection, published by Colasanti (1908), in the other one in the Bergamo Exhibition (cat. III.14), in the 1514 Madonna and Child at the Accademia Carrara in Bergamo, and also in the Saint John the Baptist in the Landscape at the Columbus Museum (Ohio), signed and dated 1521. The present small painting may well be a smaller size version, in a vertical shape, of the large canvas depicting the Nativity at the Gallerie dell’Accademia in Venice, whose composition is mostly repeated; a work that Heinemann dated around 1521 (1962, p.139), but should in fact be dated after the 1524 Crucifixion in the church of Sant’Alessandro della Croce, as rightly noted by Cortesi Bosco (1980, pp. 39,57). Notwithstanding, with regards to a dating around the early years of the third decade, as suggested by Meyer zur Capellen (1972), and the one slightly brought forward, between 1519 and 1521, as proposed by Lucco, the rendering of the image displays a polished, softened colour, punctuated into zones, whereby the volumes are flattened; the herd in the background, the dark outlines of the shepherds are merely patches, touches of black and white that undermine the continuity of the coloured areas where they emerge.

Still, if one may notice a loss of integrity and volumetric idealisation of shape, which Previtali had never foregone beforehand, this is counterbalanced by an airy sense of continuum of the vision, along with brightness and sparkle, often enhanced by a series of mission gold touches, as was the case in other circumstances, giving rise to the freshness of a spring dawn, of meadows replete with dew. Old, dry leaves on the branches shine bright with their rust against a silver sky, and do not grow dark in the backlight. The artist may have achieved such a velvety colour fusion by employing several tempera coatings, in the underneath layers, as the peculiar craquelure on the surface suggests. As far as style is concerned, however, it is clear that such fusion represents Previtali’s answer to the requests arising from more modern events of the Veneto culture in those years. An instance may be the tendency towards colour fusion, albeit harmonised on paler and more brilliant hues, that may be defined as “Giorgione-esque”: in truth, Previtali always stands on the edge, or beyond Giorgionismo, because of his inability to break free from the formal Bellini grammar, here harmonised in a feeble symmetrical balance, for instance, striving towards classicism, that lies at the heart of his painting style. Even so, that touch of stain on Saint Joseph’s right hand, holding the stick, the red cheek-bones on his face, his soft-focus beard, the harmony of yellow and violet in his clothes, the snap of the Virgin’s white veil, surely suggest that he was familiar with the Castelfranco master, especially his early works, such as the Benson Holy Family in Washington. Despite his grey hair, Saint Joseph is still a sound, vigorous man, according to the singular iconography that originated in Bergamo following the Lent preaching of Friar Girolamo da Piacenza in 1512, that would soon lead to the creation of the School of Saint Joseph in the Servite church of San Gottardo (Colalucci, 1989, pp. 32-36; Wilson, 1996, pp. 39-74; Rossi, 1998, pp. 27-44). On the other hand, that peculiar smoothness and fusion of the painterly rendering, in its features as “Lombard” atmospheric corrosion, may also hint at the impression aroused by the arrival of the Deposition in the Sepulchre in close-by Brescia by Bernardo Zenale, as already observed when taking the 1514 Madonna and reading Child into account; once again, I believe that the physiognomies of the figures in the present work refer to that painting, as well. One should not forget the pressure of the northern world, either: the peculiar morphology of the tree in the background, beyond the hut, somewhat closely stems from the engraving depicting the Great Courier by Dürer, a sheet that Previtali would have known at least in 1510. The hut construction, too, featuring rustic beams and pointed planks in the fence, may have been inspired by freely reinterpreted motifs of the Nuremberg master. In truth, as in all other cases, there is no precise source for this image devising. Almost akin to an out-of-season fruit, its taste almost everywhere a distant memory, one notices a blatant consent to the “proto classical style”, by observing the sweet curve of the Virgin’s mantle, the rhythmic grace of the gesture and the nearly symmetrical behaviour. We should also not forget a certain structural affinity of the image between this painting and the Nativity by Boccaccino at the Capodimonte Museum in Naples, a work that was probably painted in Ferrara, but which already showed connection with the Venice taste.

One may easily maintain that Previtali, who was probably in Venice for parts of the first decade of the Cinquecento, may have known the Cremona painter; the latter had put one of his altarpieces in the San Giuliano church by 1502. Finally, inevitably, the present painting provides an answer to Lorenzo Lotto’s art; the painter had arrived in Bergamo in 1513, or perhaps in the very last months of 1512, and Andrea had maintained a documented friendship with him. In fact, there is no doubt that the taste of contrasting dramatically dark and bright areas, the shadow bubble of the hut and the brightness of the meadows, the mountains and the sky, that Previtali had already experimented in other instances, may have obtained a formidable strengthening by the Martinengo Altarpiece by Lotto, now in the Saint Bartholomew’s church in Bergamo, finished in 1516, and especially by the unrivalled predella section depicting the Deposition, entirely taking place in the shadow of the mountainous spur, streaked by side blows of light. Previtali’s love for the predella in particular can be seen in the unmistakable proof that is the Saint Jerome in Repentance and the Stoning of Saint Stephen at the Accademia Carrara. It is clear, however, that precisely because of that documented friendship with Lotto, not only had Previtali access to the latter’s public paintings, but also to the ones executed for private clients, destined to be jealously closed behind the doors of palaces. Despite the many differences, it does not seem to be possible to deny a certain psychological relationship with the Nativity panel by Lotto, signed and dated 1523, now at the Washington National Gallery. What’s more, the origins of Saint Joseph’s gesture in the present painting, pointing his finger towards the sleeping Child and looking at the viewer, can only be seen in Lotto’s Susanna and the Elders at the Uffizi, signed and dated 1517, or in a more coherent context, in its namesake, who presents the Redeemer to Saint Rocco, with considerable increased energy, in the fresco in the Credaro tabernacle, signed and dated 1525.

How then should one place this Nativity Scene in Previtali’s career? In view of the above mentioned stylistic references, and a further observation that the face of the Virgin, seen in profile, strictly corresponds, although on the opposite side, to the Virgin to the right in the Saint Orsola section of the Santo Spirito polyptych, dated 1525, it is blatant that the present painting can only find resonance in the final three-year period of that activity, between 1525 and 1528, as is the case for the Saint Jerome and Stoned Saint Stephen at the Accademia Carrara, also close to the Berbenno polyptych in Carrara, when Previtali seems to find a new stylistic measure in a “spring” painting, composed of synthetized shapes and pure colour, a phase that was alas soon cut short by his death from plague, in 1528.